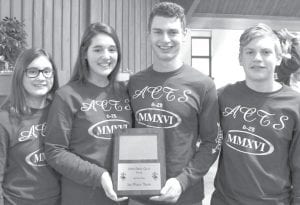 Season Champions These four Bible quizzers took first place in the 2016 Northwest Ohio Bible Quiz season by winning all five of their matches, Sunday, Feb. 28, to finish 21-2-1. Making great sibling memories, the House Church team “Right” is made up of Archbold students, from left: Kate Nofziger and Hope Nofziger; Joe Richer and Josh Richer. They are coached by Carrie Nofziger and Adam Steider.– courtesy photo

Bible quiz teams from four different churches had the highest average scores for the day at the Sunday, Feb. 28 meet at West Clinton Mennonite Church.

“Right,” House Church, averaged 122 with five wins, and “Dogs Still Under the Table,” West Clinton, had its best meet of the year, averaging 110 points in six matches.

The area’s top four teams for the season were divided among four area churches.

Taking the season was “Right,” with a record of 21- 2-1. Members are Joe and Josh Richer and Hope and Kate Nofziger. 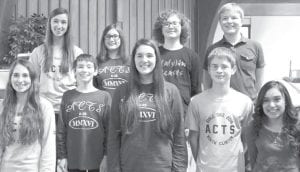 “The Mob,” Pettisville Missionary, which rejoined this season, went 15-8-1 for fourth.

The highest-scoring 25 individuals also received trophies. At least one quizzer from all 13 area teams made it into the “top 25.”

The two top individuals who quizzed out in all 24 matches were Archbold senior Cara Foor and Archbold seventh grader, William Nofziger, who both scored 840 points.

Just one question less and tying for third were Hope Nofziger and Chris Foor, both with 825. 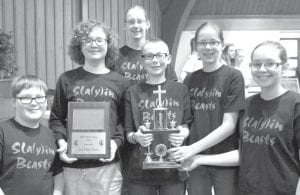 Area teams will participate in a tournament of more than 70 teams at Central Christian High School, Kidron, on Sunday, March 20.