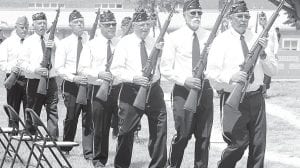 After firing the traditional 21-gun salute, members of the Archbold American Legion-Sons of the Legion firing squad march at the Pettisville Memorial Day event, Monday, May 28 at the Pettisville Cemetery. From front to back, right to left: Bruce Bernath, Steve Miller, Paul Van Sickle, Steve Schroeder, Zeno Miller, Frank Grime, members of Post 311, and Andy Dominique, a member of the Archbold squadron of the Sons of the Legion.– photo by David Pugh