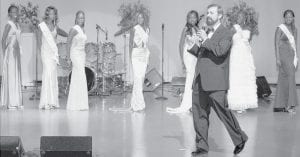 Robert Freeman, Ridgeville Corners, on stage with the finalists in the Miss Sudan beauty pageant. The event was held in Kansas City, Mo. early last month. It was the first time a Miss Sudan had been selected. Freeman got involved in it after meeting the pageant founder in connection with a writing project.- courtesy photo

Talk about a small world… Robert Freeman, of Ridgeville Corners, was recently a judge and master of ceremonies for a beauty pageant.

Freeman, an actor, author, substitute teacher, and former working mechanical engineer, got involved in the Miss Sudan project through a screenplay he’s been working on, “Naomi Sitting Hawks Woman,” with another man from Georgia.

Part of that story takes place in Sudan, and because of that Sudanese connection, Freeman was put in contact with Yar Kang, a Sudanese native and refugee.

Sudan has been involved in civil war in one form or another “forever,” Freeman said.

“It’s pretty much a religious war, Muslim vs. Christians. The country has always had problems,” he said.

In Sudanese culture, Freeman said women “are not appreciated.”

Fleeing the strife in their country, many come to the United States, where they are lured in by “modeling agencies.”

“They’re taken advantage of in their own country, and the same thing happens here,” he said.

It was Kang’s idea to hold a pageant and select a Miss Sudan, as a way of giving them all hope for the future.

Freeman said he often talked to Kang, sometimes daily. He volunteered to be a pageant judge, was a part-sponsor of the event, and was also one of three masters of ceremonies.

“I had the most important part, announcing the top three, and the queen,” he said.

When Freeman announced that Amani Sara Agory, representing the Juba region of southern Sudan, was Miss Sudan 2008, she fainted, collapsing in his arms.

She is the first-ever Miss Sudan.

Right now, Miss Sudan cannot compete in Miss Universe or other events, because the pageant is not recognized.

“We have to get it recognized as a legit pageant,” Freeman said.

“We had no corporate sponsors at all. We did it low-scale,” he said.

Working with the Miss Sudan pageant was a moving experience, he said.

“You look at these girls, they look like any other citizens of our country.

“But they all came over from Sudan, and all have stories.

“Our second runner-up lives in St. Paul, Minn. She was kidnapped as a child. She was adopted here and raised by white parents.”

“Our first runner-up lives in San Diego, Calif. She wants to go back and find her father. He went off to fight in the wars, and over there, you just never hear from them again.

“Our queen was born in southern Sudan. Her mother took her to Khartoum, then her grandmother brought her to this country.”

Freeman got involved in civil war reenacting, which led to appearances in several scenes of “Gods & Generals,” a civil war movie filmed in 2001.

He also has been involved in independent film productions, ranging from science-fiction horror to other civil war period pieces.

Recently, Freeman said he’s being doing a lot of writing.

Working in the entertainment field, “is not easy, but I just love doing it,” he said.