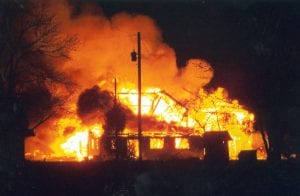 The first call was at 9:11 pm on Wednesday, April 23, for a fire at the Steve Beck farm, 22-493 St. Rt. 34. The address is east of the Four County Vocational School and the Northwest State Community College.

The first fire engine went to the fire scene, and the first hose line was assigned to protect the house from the fire, which had engulfed the barn.

The second engine went to the Career Center. Firefighters connected to a hydrant that drew water from the nearby NSCC water tower. Water supply was not a problem, Benecke said.

"The house was our biggest exposure, and we had power lines down on the ground that were still hot until we could get the fuses pulled," he said.

In all, six hose lines attacked the fire.

Benecke said damage to the large barn was $70,000, plus another $12,000 in damage to the contents, which included two fishing boats and a skidsteer loader.

The fire produced many large embers, some of which landed on the roof of the Career Center. The burning embers melted through the rubber roof. Damage to the Career Center was estimated at $5,000.

Cause of the Wednesday fire is under investigation.

In fact, Benecke said he was going through the rubble Monday, looking for the cause of the first fire, when at 2:11 pm, Ridgeville was called to a second barn fire, at 28-743 Allen Rd.

"I already had my turnout gear on," he said.

The fire was south of Ridgeville, in Adams Township.

As he approached the fire from Harper Road, Benecke said he could see flames through a hole in the roof of the barn, owned by Tim Roberts, who resides there.

When he arrived, the barn was fully involved.

A nearby pond supplied water.

The burning barn started another building to burn; putting out the blaze was the first task. A nearby metal-clad building was all right.

Heat from the blaze curled the vinyl siding on the house.

After the exposures were protected, firefighters turned attention to the barn.

Benecke said the fire started from a trash fire Roberts had going.

He tried to use a garden hose to put out the fire, but it got away from him, Benecke said.

Roberts was placed in the Ridgeville ambulance, but declined treatment for exhaustion.

Benecke said Roberts had started tearing down the barn; he estimated the damage at about $10,000.