Ridgeville Falcons Night Has Extra Meaning For Some Fans 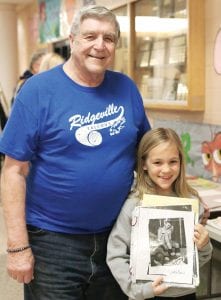 Scenes from Ridgeville Falcons Night at AHS, Saturday, Feb. 2. Left: Wayne Kruse, Ridgeville Corners, with his granddaughter, Kenli Kruse, 8, Tinora. Kenli holds a photo of her grandfather when he played basketball at RHS in the 1960s. Center: April (Curry) Crooks, AHS ‘89, Toledo, looks over old yearbooks for photos of her mother, Lois (Schnitkey) Curry, RHS ‘70. Her mother died in 1988. Right: Phyllis Hesterman, an RHS graduate, teacher, and AHS teacher, with Tom Vershum, who also taught at Ridgeville and Archbold.– photos by Mary Huber and David Pugh

Ridgeville Falcons Night at Archbold High School, on Saturday, Feb. 2, was a night to honor the history of the Ridgeville School District.

The Archbold boys basketball teams and cheerleaders dressed as Ridgeville Falcons for their games with Tinora.

For two people, it also proved to be a chance to discover something about their personal histories.

“I’ve never seen these photos, and I’m really excited about it. It’s bringing tears to my eyes,” April said.

She said her mother attended Ridgeville Schools from kindergarten to 12th grade.

Her mother met Tom Curry, of Delta, while both attended the Four County Career Center. They married after graduation. 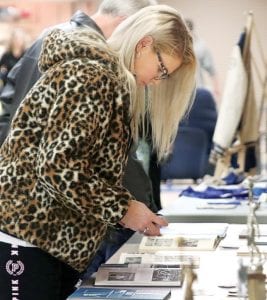 She said her mother “looks a little different than what I expected in a couple of photos, and I found that she was in the Spanish Club, something I never would have guessed. So that was interesting.”

Kenli Kruse, 8, a Tinora student, discovered something about her paternal grandfather, Wayne Kruse.

She saw a photograph of her grandfather from about 1962, she believed, when he played basketball for the Falcons.

“I never knew he played before,” she said.

“I also figured out he did cheerleading and basketball, and… I’d forgotten another (activity).”

Between the junior varsity and varsity games, Ridgeville graduates and former faculty members gathered at the center of the AHS gym floor as the AHS pep band played a Ridgeville fight song. 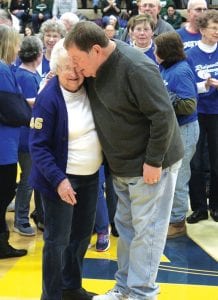 Phyllis wore a blue sweater with the numerals “46.”

“It was my husband’s. He graduated the year before I did,” she explained.

In addition to being an RHS graduate, she taught at Ridgeville, and later, at Archbold Middle School.

Vershum taught at Ridgeville during the last year; he, too, then took a position at Archbold.

Originally formed in 1941, the Ridgeville School District was divided in 1969 and consolidated into the Archbold and Napoleon school districts.

Archbold Schools operated the building as a middle school for many years.

After construction of the current Archbold High School in 1990, the Ridgeville building was sold to Christ Community Church, which owns it today.

Royal Short, AHS principal, said school officials had such a great response from that first Falcons Night, “We wanted to make it not an annual (event), but every couple or three years, just to pull in that community, because we’re all under the Archbold School District.

“It’s just kind of nice to honor them, their legacy, and their past, now that it’s become part of ours.”

Community reaction “has been great. It’s been very easy to find the sponsors,” he said.

“I didn’t have to ask twice. Some people even called me and said, ‘We hear you’re looking for sponsors. We’d like to be added to the list; we didn’t get a chance to do this the last time.’

He recognized Joanne Haver, Vicki Hesterman, and Eileen Stough for their help.

Haver, Hesterman, and Stough “took pictures of yearbooks and sent me old pictures to set out and kind of helped me get the word out about the memorabilia,” he said.

He also complimented Jodi Gerken, AHS secretary, for organizing the memorabilia for display.

Short said the students were excited about Falcons Night.

“In fact, we found a couple of jerseys from the last time we did it. We put them out just to sell, and they were gone in about two hours,” he said.

This year, the team wore Blue Falcons uniforms, and fans bought t-shirts of the same color.

“You can tell by looking at the student section, there’s a whole lot of royal blue, so a lot of kids bought shirts,” he said.

The school had ordered about 170 shirts, which sold out, he said.