The top-ranked boys basketball team in Division III was known by another name, Saturday, Feb. 2, but the result was the same.

The Archbold Blue Streaks played as the Ridgeville Falcons to honor the heritage of the former school in Ridgeville Corners, which closed in 1969.

Some of the students became students at Archbold, while others went to Napoleon or Tinora after the closing.

Archbold kept its record perfect at 17-0, defeating Tinora 59-33, Saturday, Feb. 2, in a non-league contest in the Thunderdome.

The Rams are coached by the legendary Paul Wayne, whose teams are known for their pass-first, low-scoring type of offense.

While the game started slow, the Falcons controlled the tempo early.

“We just knew if we let them, they were gonna just pass, pass, pass,” said Joe Frank, Falcons head coach. “It keeps them in the game, and they’ve had a long history of success doing that. 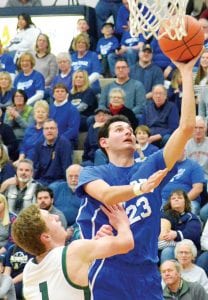 Jeron Williams scored six straight points to open the second to push the Falcon lead to 21-8 with 4:13 left in the half.

The Rams scored the next five points, but were held scoreless for the final 3:26 of the half.

“Offensively we weren’t hitting on all cylinders, but there was no reason to be disappointed because we were up 16 points,” said Frank.

“In this game, 16 points is a lot bigger than it would be in a normal game because they (the Rams) take more time off the clock (on) each possession.”

The second half started with a strangling defensive press by the Falcons that forced a pair of Williams steals and layups, forcing a Tinora time-out.

Ridgeville then forced another Ram turnover, which led to a Wiemken bucket for a 35-13 lead.

The starters played the majority of the quarter before being replaced with three minutes left.

The reserves finished the third leading 47-20 and closed out the final eight minutes for the 59-33 win.