Ridgeville Falcon Night, Friday, Feb. 5, at Archbold High School, was, by any standard, a big success. The Ridgeville School District was consolidated into three districts in 1969; one was Archbold. Top: RHS alumni and former members of the faculty and staff sing the Ridgeville alma mater and a fight song on the gym floor. Lower left: Members of the Ridgeville School District staff in attendance and recognized between the JV and varsity boys basketball games, from left: Tom Vershum, who taught at Ridgeville for one year before taking a position with Archbold schools; Phyllis Hesterman, a teacher at Ridgeville before joining the Archbold staff; Larry Sinclair, a teacher; Ed Haughan, a teacher and coach at Ridgeville and then other districts in Ohio and Michigan; and Lillian VonDeylen. She and her husband were longtime custodians at the School. Lower right: Darlene (Helmke) Myers, RHS ‘53, left, and her sister, Mary Ellen (Helmke) Fedderke, RHS ‘55, look at some of the Ridgeville memorabilia on display. The sisters both reside in Ridgeville Corners.– photos by Mary Huber and David Pugh

The event celebrated the Ridgeville School District, which was consolidated into Archbold and two other districts at the end of the 1968- 69 school year.

“We expect a few more sales, but anticipate being able to send the F.F. Hesterman Scholarship and the Ridgeville Community Park checks for around $1,100 each when all is complete,” he said.

The scholarship program honors F.F. Hesterman, a Ridgeville school administrator for many years.

“We are very pleased with the amount of t-shirts sold and the funds raised for the two groups,” he said.

In an earlier article in this newspaper, Rex said Falcon Night, originally announced in July 2015, “is a way to honor the tradition and history of Ridgeville Local Schools and recognize the role it played in the community, and the part they play in Archbold Schools, as well.” 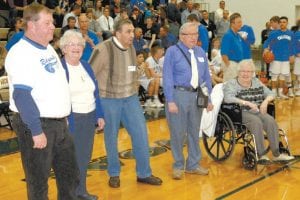 Rex said Falcon Night “was a great event for the students, community, and most importantly, the alumni and faculty of Ridgeville Local Schools.

“We were very pleased with the attendance that evening, and we have heard a lot of positive feedback from a variety of individuals.”

“It was fun to see the people here reminisce as they looked at the Ridgeville memorabilia and visit with each other,” Rex said.

“Whether it was the singing of the alma mater, fight songs, or cheering the team on to victory, it was an exciting night.” 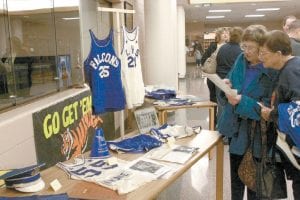