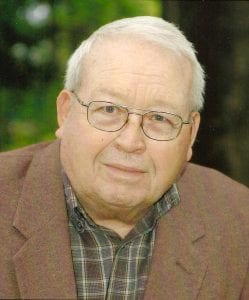 Richard L. “Dick” Schlueter, age 76, of Quincy, Mich., and formerly of Pettisville, passed away unexpectedly on Wednesday, July 31, 2013, in his home.

Prior to his retirement he had owned and operated, along with his wife “Dee,” the former Dick and Dee’s Photography Studio in Pettisville for over 40 years.

Dick was born in Defiance on April 20, 1937, the son of Martin and Helen (Dirr) Schlueter.

A member of the Professional Photographers Association of America, he had earned “Master of Photography”. Dick was a Navy Veteran from 1955-1956. He was also a licensed Amateur Radio Operator and licensed Private Pilot.  Dick was an avid sailor and had an uncanny sense of humor!

Funeral services will be held at 2 p.m. on Saturday, August 3, 2013, at St. James Lutheran Church, with the Rev. Robert Eickmann, officiating. Interment will follow in the St. James Cemetery, near Archbold. There will be no visitation.

The family requests that in lieu of flowers, memorial contributions be given to LCMS.org/schlueter. Online condolences may be offered to the family at www.grisierfh.com.

Grisier Funeral Home in Archbold has been entrusted with arrangements.