"The Best Advice My Mother Ever Gave Me" 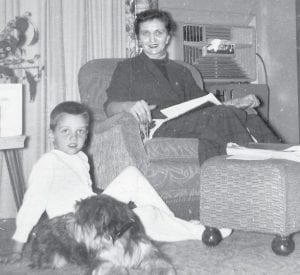 Chris Rychener, 6, Pettisville, appears with his mother Thelma, in a photo taken in January 1956. He was one of several persons who shared stories about their mothers and some of their best advice. He said his mother told him she only remembered spanking him once. He replied, “I probably didn’t deserve that one, either.” Sunday is Mother’s Day.– courtesy photo

As the nation prepares to celebrate Mother’s Day, Sunday, May 8, several area individuals talked about the best advice their mother ever gave them.

Some of it was humorous. For example, John Huffman, Archbold resident and kart racer, said his mother always told him to wear clean underwear in case he was in an accident.

“Little did I know that one day this would happen, as I had a racing accident and had to go to the hospital,” he said.

“The next day, after she found out what happened, she came to see me.

"She asked, ‘Were you wearing clean underwear?’ to which I responded, yes.

“She said, ‘Well, at least I taught you something,’ and laughed."

Perry Rupp, Fulton County commissioner, said his mother, Rita, always told him, “’Tell the truth or I will wash your mouth out with soap!’

“This should be the new policy in Washington!” he said. 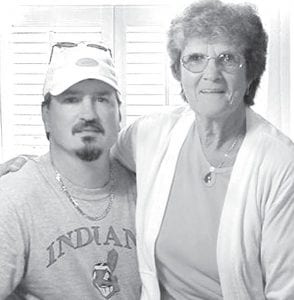 Mike Lane, Pettisville High School principal with his mother, Darlene, in a photo taken in 2001. He said he shares the advice she gave him with his students. “I thank my mom for the person I am today, and hope she has many more Mother’s Days ahead for me to celebrate just how special she is to me,” he said.– courtesy photo

Some of the advice was serious.

Growing up in a military family, Lane moved around the country several times.

“That meant always making new friends, then having to leave them, which was not easy.

“Treating everyone with respect, both children and adults, made the transition to new schools much easier for me and taught me the value of mutual respect, which is something I cherish at Pettisville, because it exists at a high level between our students and staff.

“My mother’s conversations with me about honesty were about making sure I always maintained that character trait as I matured.

“My mother’s words of advice have obviously had an impact on the manner in which I have lived my life and raised my children. This advice has been passed on to the children I serve at Pettisville.

“I thank my mom for the person I am today, and hope she has many more Mother’s Days ahead for me to celebrate just how special she is to me,” Lane said.

“She told me one of her worst memories was one where the sheriff came and ‘red-tagged’ her house,” meaning it was being foreclosed upon.

“Her grandfather bought the property at the sheriff sale, but it prompted her to give me this one bit of advice: ‘Life is not fair. However, you have the responsibility of being as fair as you can, when you can, while preserving your core principals.’”

Jeff Robinson, Fulton County Western District Court judge, said what his mother taught him most was “to believe in myself.

“Coming from a working class family, there were doubts about what I could accomplish. She always reassured me that what I wanted to accomplish, I could, if I made the effort.

“Her confidence in me was always reassuring and helped me reach goals when I doubted my own abilities.

“In time, I learned the truth, that we are limited only by what we think we cannot accomplish. Everything is possible provided an individual is willing to sacrifi ce and stay focused on his or her goal.”

“No matter what situation was going on in my life, my mother always let me know the confidence she had in me to handle it. And she still does.

“This has been huge in my life,” he said.

The first is, “It is not important to me whether you grow up to be a fire chief, an Indian chief, a president, a janitor or a common laborer. I will always be proud of you because I know you will always do your best at whatever job you do.”

The second, he said, was, “The best ‘good deed’ that you can do for someone is a good deed that they are not aware that you are doing.”

Carla Hartz, a Pettisville elementary teacher, said her mother died when she was 13.

“I just have a young girl’s impression of her.

“I do like to think I inherited her willingness to serve others, as she was always involved in our church activities and she spent a lot of her time doing for others.

“She left my sister and me a good example to follow.”

Kris Warner, kindergarten teacher at Archbold Elementary, said some of the best parenting advice she received was from her mother, who said, “Choose your battles.”

“We always enjoyed her home-cooked meals. When we finished a meal and there was still food in the dishes, she would pass them, and her advice was, ‘eat for when you get hungry.’”

Chris Rychener, Pettisville, said, his mother, Thelma, “told me one day many years ago when we were talking about the old days that she only remembered giving me one spanking.

“I looked at her and told her I probably didn’t deserve that one either.

Robinson, who lost his mother about 20 years ago, offered advice for others.

“I wish I had told her how much her guidance meant to me while she was alive.

“It is a huge regret that I hope others who read this will avoid,” he said.