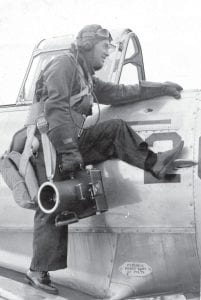 Sellers Going Up James Sellers, Archbold, was one of the last photographers in World War II to take photos of Japan before the atomic bombs were dropped.

(Editor’s Note: This article appeared in the July 10, 1991 Quasquicentennial edition of The Archbold Buckeye.)

Do you recall how those listening to the radio were startled when programs were interrupted by a news flash that the Japanese had bombed Pearl Harbor?

Eighty-six ships of the United States Pacific Fleet were bombed by some 360 Japanese planes.

Hickman and Wheeler fields were bombed and strafed, Japanese bombers totally destroyed the battleship Arizona and severely damaged four other battleships, the Oklahoma, Nevada, California and West Virginia, plus three destroyers, one target ship and one mine layer.

The battleships Pennsylvania, Maryland, and Tennessee were damaged, along with the cruisers Helena, Honolulu and Raleigh.

Archbold residents who remember that day recall their reactions;

Orrin R. Taylor: Walter A. Givin and I were working on that week’s edition of the Archbold Buckeye. I was setting advertising and making up pages.

Givin was running the linotype when the musical program we were listening to was interrupted by the first news flash, “Japan’s Zero planes have bombed Pearl Harbor.”

The attack took place at 7:55 a.m., Hawaiian time, 1:55 EST. I immediately called my home to tell Mrs. Taylor the news and my parents’ home to advise them of the tragedy.

Dean Thatcher: I was at home in Deshler. I was probably about 14 or 15.

We heard it on the radio after we got home from church, I guess, but that was a long way back.

I remember that 12 of us joined the Air Force in a pre-entry program. We didn’t actually go until 1944, but everyone was gung-ho and ready to go right away.

Earl Lovejoy: I had the radio on all the time. We were listening to a program when they broke in with the news.

We listened for the rest of the day until they stopped reporting. All Archbold felt sorry for those concerned.

Caroline Palmer: We lived in Napoleon. It was afternoon, and we were just sitting around listening to the radio when they broke in and told us about the bombing of Pearl Harbor.

We were so upset and excited. I don’t remember what we actually did then, but I sure remember that day.

Robert Stotzer: I was at a movie. We didn’t hear about it until we got back to the fraternity house.

I was in college at Ann Arbor at the time. A lot of the ROTC guys and seniors went right away.

A couple got killed almost immediately.

If I remember correctly, the campus was quite quiet.

Emma Grime: Everyone was home, and we had just gotten our first radio shortly before that.

All at once a news flash came over and my dad told everyone to be quiet. We all listened and we were really astounded.

I can remember so well my father saying, “Well the Japs will sure get what’s coming to them.”

Becky Stamm: We heard it over the car radio coming home from Toledo. It had a great effect on my life because my brother was in the Army and ended up on all the islands and was shot.

My husband was ready to be drafted, so it really was shocking.

Marilyn Smith: The first I heard it was when I was on my way to Wauseon Hospital to make a call on a friend.

Smitty and I were living in Edon at that time, and we came to Mom and Dad’s, then on to Wauseon, and that’s where we heard it.

There was a general feeling of shock and disbelief throughout Archbold.

Willard DeGroff: I was farming when I heard the news and went right in and listened to the radio.

Charles Gautsche: I remember I was in school at the time. I remember my impressions better than what I was doing.

For me as a child at that time there was a lot of fear. It was unsettling.

We had heard about the Nazis going across Europe and everything and this brought things home.

Lowell Short: On the evening of Dec. 7, we gave our county speech for the Prince of Peace.

My upbringing and the teachings of my church didn’t cause my feelings to change much over the events of the day, but I remember Mr. T.L. Parker getting up that night and announcing that Pearl Harbor had been attacked.

I guess it hadn’t dawned on people that much yet to make these speeches more emotional than usual.