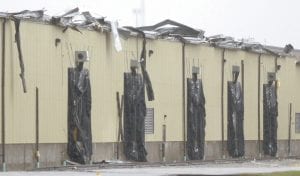 Damage from a severe thunderstorm that hit Archbold, Sunday, Nov. 5, was evident along the roofline above the truck docks of the ConAgra plant that afternoon.

Fox said the plant was at full capacity one week after the storm struck, but repairs are still underway.

She said about 150,000 square feet of the roof are being replaced, along with a damaged exterior wall. A temporary wall has been erected until the wall can be repaired.

She said there is some damaged equipment in the plant that must be replaced, but it does not impact production.

Company officials said no one was injured due to the thunderstorm.

Archbold Fire Department crews were called to the plant at 12:38 pm, shortly after the storm passed through.

When they arrived, there was an odor of natural gas coming from the building. ConAgra workers, and later, Ohio Gas Company employees shut off the gas to the building.

Bits of metal siding were torn from the building.

Some ended up in electrical lines, causing a roughly two-hour power outage to parts of the village.

Tufts of fiberglass insulation were blown over the village, with some bits being blown as far as a mile away.

At least one piece was blown even farther, to County Roads C and 19.

Although there were reports of tornados in Indiana and Ohio, no signs of a tornado were observed in the Archbold area.

Fox said ConAgra officials hope to have repairs to the building completed by the spring.