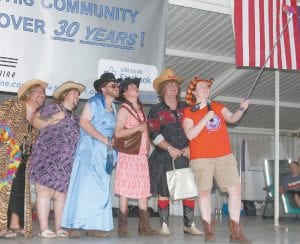 Dude Looks Like A Lady… One highlight of the annual Fulton County Relay For Life event is the Miss Relay Contest, which features men dressed as women. This year there were five contestants who donned clothing of the opposite gender to compete. Jodie Arkwright, master of ceremonies and a leader of the event, took a moment to take a “selfie” photo with the Miss Relay contestants.– photo by David Pugh

Amanda Bird, an event leader of the annual Fulton County Relay for Life, said the event, held Friday and Saturday, June 10-11, at the Fulton County Fairgrounds north of Wauseon, raised just over $100,000.

Relay for Life raises funds for the American Cancer Society.

The organization starts and ends its fiscal year at the end of August.

Bird said the 2016 fundraising effort is ahead of the same point in time in 2015.

“We still have some big fundraisers coming up this year,” so Bird said she anticipates topping the $104,000 figure.

Bird said attendance was up, in spite of the weather.

“It was a little warm for our liking,” she said.

The Archbold Wastewater Treatment Plant recorded high temperatures of 88 degrees on Friday and 97 degrees on Saturday.

Each year, one feature of the event is the Miss Relay Contest, which features men dressed as women. In 2014, there were 11 contestants. In 2015, there were eight.

Bird said money raised by Relay for Life is shared between cancer research and programs for local cancer patients.

One of the local programs supported by Relay money is “Look Good, Feel Better.”

The program, offered through the Fulton County Health Center, helps women who are fighting breast cancer with makeup tips and help with wigs to let survivors feel more “normal.”

Another program offered through FCHC is “Road to Recovery.” The program provides volunteer drivers to transport cancer patients to and from therapy sessions or doctor visits.

Bird said Relay for Life started in 1985, making the program 31 years old. It started in Fulton County soon after that.