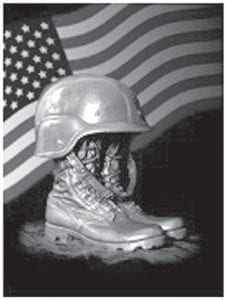 During Memorial Day services, Monday, May 30, speakers talked about honoring and remembering those who gave their lives in service to their country.

They spoke of those who faced death with courage and bravery, with selflessness and devotion.

They talked about those who put themselves in mortal danger to save their comrades in arms.

They pointed out the dead had given all they had in the name of liberty, for the cause of freedom.

We live in the world today, and we enjoy what we have, because of those who sacrificed on the fields of battle– all 1.2 million of them.

And yet, what do we, the living, do with the freedom that came at such a high price?

We continue to allow racism to endure, and towns like Ferguson, Mo., erupt in flames.

Through indifference or ineptitude, we poison the people of Flint, Mich., and then insult them further with a half-hearted response.

We tolerate the intrusion of government into our lives, which watches our emails or keeps track of who we call on the telephone.

In spite of our much-vaunted War on Drugs, heroin sneaks in our back door and kills people, almost randomly.

Our political debate has ratcheted up to the point dissenters at political rallies are being assaulted by those who hold differing views. Instead of civil debate, our politicians screech insults at one another.

Is this the America for which so many died?

Scott Reed, United States Air Force colonel and the Ridgeville Corners Memorial Day speaker, called upon us to each do what we can to make this a better place.

We wholeheartedly agree, and add there is much to be done.