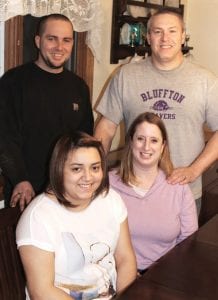 Jennifer Sauder-Nichols and her husband, David Nichols, hosted Jennifer’s cousin, Jeremy Bonilla, and his girlfriend, Mara Collazo, who live in Puerto Rico. The group talked about Hurricane Maria, which struck the island in September 2017, and its aftermath. Seated, from left: Collazo and Sauder-Nichols. Standing are Bonilla and Nichols.– photo by David Pugh

It will be a long time before things return to normal on the island of Puerto Rico, Jeremy Bonilla said last week.

Jeremy lives in the Commonwealth of Puerto Rico, a U.S. territory.

His home is outside Aibonito, a city located away from the coast. About 26,500 persons live there.

In October, after the storm, his cousin, Jennifer Sauder- Nichols, and her husband, David Nichols, rural Archbold, went to Puerto Rico to help.

On Dec. 2, Jeremy and his girlfriend, Mara Collazo, came to stay with the Nicholses. They are due to return to Puerto Rico this week.

The Bonilla family raises chickens for meat in large chicken coops, some two stories tall. Jeremy works for his brother, who operates a dump truck business.

When the storm came, they parked truck trailers around the house and put wood over the windows. 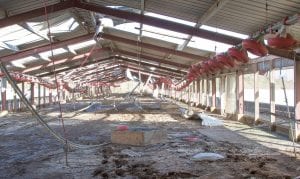 Above: Jeremy Bonilla’s family operates a large poultry business in Puerto Rico, raising hundreds of thousands of chickens for meat. This photo shows the damage to one of the large chicken coop buildings caused by Hurricane Maria. Left: Bonilla, far right with hat, used one of his brother’s dump trucks to deliver water in the town of Aibonito. With electricity knocked out by the storm, water could not be pumped through the town.– courtesy photos

“Not many houses have basements. Most of the houses there are concrete,” Jeremy said.

While his home was not damaged, many of the houses in the area lost their roofs, and some made from wood “just blew up.

“It started to blow pretty hard around 2 in the morning. It lasted until 5 or 6 in the afternoon,” he said.

Like most of the island, they lost power, but the family has large generators as part of the poultry operation.

They would run the generators about eight hours a day.

Neighboring homes connected to the Bonillas’ generators before power from the national power company was restored.

During the eye of the storm– the center of the storm where winds are calm– Jeremy said they went outside to look at the damage.

On each of the Bonilla family farms, there were 100,000 chickens, Jeremy said. 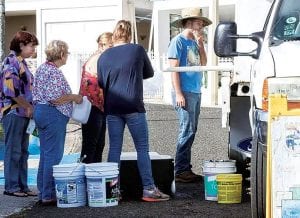 At his grandmother’s place, not many were killed in the storm. But for two weeks, they couldn’t get feed for the birds, and many died.

David said while he and Jennifer were there in October, he helped repair the buildings.

The winds stripped trees of their leaves and knocked them over into the roads. The roads weren’t cleared right away.

“It was on a Tuesday. On Friday, I went to Mara’s house in my jeep. You could fit my jeep (through the downed trees), but nothing else,” Jeremy said.

In Aibonito, Jeremy said stores ran low on food. Some towns were isolated to the point that food had to be flown in by helicopter.

“One of the worst things was gasoline. Because there were so many trees in the roads, the trucks could not make it” to deliver gas, he said.

A big issue on the island was fresh water. The Aibonito municipal water plant was operating, but water couldn’t be pumped out to homes in the city.

Jeremy took a dump truck with water tanks in the back and delivered water to residents. Fortunately, Jeremy’s father had diesel fuel stored, so there was enough for the truck.

“People would use whatever they had, like the bottom of a sweeper (the type used in a garage or workshop) or paint buckets,” she said.

Mara’s younger sister, Rubi, 18, is a high school senior. After the storm, plans were made to have Rubi come to Archbold to finish school.

As part of those plans, Jeremy and Mara scheduled a visit and bought their plane tickets.

Then Rubi’s school reopened. Since Jeremy and Mara had their tickets, they came anyway.

“We came just to see if we liked it here,” Jeremy said.

“In the middle of winter,” Jennifer said.

When Jeremy and Mara arrived, the temperature in Northwest Ohio was zero degrees or below, Jennifer said.

Jeremy said in Puerto Rico, it doesn’t get cold. When asked about snow, Jeremy said, “We don’t get none!”

The entire island of Puerto Rico is about 100 miles by 35 miles.

It takes about four hours to go from one end to the other.

The foursome of Jeremy, Mara, Jennifer, and David took a trip to St. Louis. The visitors were surprised when they drove seven hours– one way!

Puerto Rico had challenges before the storm struck.

The government was in deep debt.

With Jeremy translating, Mara explained the people of the island will be affected because the government was repaying the debt.

Now, she said, that money must be used to help the people after the storm.

There were also problems with donations.

“There’s companies that have been sent money, and they haven’t used it where they were supposed to use it,” Jeremy said.

How long before Puerto Rico returns to normal?

“I don’t think it will ever be back to normal,” David said.