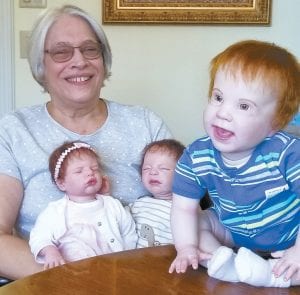 Donna Thompson with some of her “reborn” dolls. She builds and paints the dolls from kits. The doll on the table could have been a boy or a girl. “When I did his hair, that was basically telling me, ‘oh my gosh, it looks like a boy.”– photo by David Pugh

Donna Thompson’s baby dolls look so incredibly real, you think they’re real children until you get close and realize they don’t move.

“And I feel good with that,” she said, because getting them to look that real is hard work.

They’re called reborn dolls, or reborns. Thompson, a 1968 AHS graduate who lives in the Harrison Lake area, builds and paints the dolls from kits. She started about six years ago.

What got her started?

“I like painting them. Once you start painting, they just pop out at you after a while.”

One type of paint used for the dolls requires the dolls be baked between applications.

Paint is applied with brushes and sponges.

“You paint, then you bake, because the baking seals it, then you put another layer on and bake it,” she said.

Thompson doesn’t use her kitchen oven.

“I went and got an oven from a guy who fixes them. I asked if he had any in stock that were old. I didn’t need a fancy one. He had one available, so I just take them (the dolls) out into the garage,” she said.

For smaller dolls, she uses a countertop oven.

There are paints that dry in room air. She has one done with air-dry paints but, “I’m not happy with that. I took a class on that. For some reason, my air-dry paint looks so pale.”

Another one got “a little red.”

The dolls are filled with glass beads to give them some heft, and material like that used in stuffed animals.

Adding hair “is very hard. You put them on with a rooting needle, one or two strands at a time, Thompson said. Some of hers have actual human hair; others, hair from an alpaca.

While some kits are gender specific, some are not. One of her dolls was built from a kit named “Kinsey.”

“You can make Kinsey a boy or a girl. When I did his hair, that was basically telling me, ‘oh my gosh, it looks like a boy.’

“I did put girl clothes on it, but I do like the boy look better on this one.

“I have another kit just like him. On that one, the hair I put on” might influence the gender decision.

“This one (referring to another doll), I kind of wanted to be a girl, and that’s kind of where it stuck. This one (another doll) had to be a boy because it is genderwise a boy.”

Some dolls use a type of vinyl for the skin. Some may have limbs fully covered in vinyl; some may have fabric joints between, for example, the legs and torso. The cloth joints are covered with clothes.

Incredibly lifelike reborns are not for everyone.

“When they see them, a lot of people say, ‘this is freaky, I don’t even like this,’ she said.

“I take pictures (of the reborns) and send them to my siblings. They just look at me like I’m crazy.”

But her husband Larry encourages her.

Thompson said she’s never sold any of her dolls. One very similar to one she had made sold on an Internet auction website for $2,300.

“I’ve been told I need to go to the doll show or something, but I haven’t done that yet,” she said.

While some may question her hobby, as long as it brings her joy, that’s what matters.

“That’s what my husband says,” she said.

“Because there’s a lot of people who are like, ‘really?’

“But you know, they do their stuff and maybe I wouldn’t go for that. It’s each to their own.”–David Pugh