Rebekah Meller Is National FFA Agriscience Student Of The Year 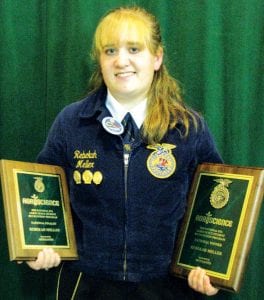 Rebekah Meller holds plaques honoring her as one of eight national finalists for the Agriscience Student of the Year award, and for being named the winner.– courtesy photo

Rebekah Meller, a 2009 Pettisville High School graduate, was named the winner of the 2010 FFA Agriscience Student of the Year award, during the 83rd national FFA convention, Oct. 20-23, in Indianapolis, Ind.

The daughter of Donna and Gene Meller, Jr., rural Pettisville, she was one of eight national finalists for the award. The award was announced Saturday, Oct. 23, during an on-stage ceremony at the convention, which also was televised live over a national cable TV channel.

During her years at PHS, and as a member of the Pettisville FFA chapter, Meller did science fair projects studying the use of garlic to inhibit the growth of bacteria in hamburger.

She decided to look into using food – in her case, garlic– to prevent bacteria growth in her eighth grade year. By her junior and senior years, she was working with Joy Cusic, then a graduate student at Ohio State University.

There was no existing research on the idea, “so why not test it?” she said.

What did she find?

“Garlic inhibits the growth of bacteria well in broth, but in hamburger, it doesn’t have a big effect,” she said.

She’s also been studying probiotics, beneficial bacteria that helps the human digestive system. Probiotics are normally found in foods such as yogurt.

Food manufacturers have been introducing probiotics in other foods, including cereal and cheese. The question: do probiotics survive the trip through the low pH (high acid levels) of the human stomach to make it to the intestines?

The answer, she said, is yes, so adding probiotics to food is beneficial.

Today, as a sophomore at Ohio State University, she is studying animal science, with a particular interest in animal nutrition.

“My family and I have a few beef cattle, and my grandpa, Gene Meller Sr., and my uncle, Kevin Meller, have dairy cattle,” she said.

Gene Sr., and Kevin have farms south of Pettisville in Henry County.

Eight national finalists are selected for the Agriscience Student of the Year award; each receives a $1,000 scholarship.

Applicants for the award must present the findings of their own agriscience-related research projects.

They also are evaluated on their general academic achievements and involvement in school and community activities.

Each finalist must give a 15-minute presentation covering the projects completed, followed by five minutes of questions from judges.

The national finalists were brought on stage, and each was given a plaque recognizing their achievement. Meller was then presented with the Student of the Year plaque.

In addition, she received a $3,500 scholarship.

“Putting this on my resume opens several career opportunities,” She said.

As a student at Pettisville, Meller said she received “a ton of support” in her studies from the PHS staff and particularly John Poulson, her FFA advisor.

Poulson said he is proud of Meller, as is her mother, who is the science teacher at PHS.

“She (Donna Meller) gets them started in science in the sixth grade. Rebekah just kept at it.”

He also noted the PHS English teachers help their students with their science papers, and Paul Bishop, 10th grade biology teacher, works with the students as well.

“I’m hopeful that other students can come up and win several awards. I see talent in students coming up,” she said.

“It was very exciting to be on the stage, and compete at the national level,” she said.

“Winning on stage was amazing, beyond words!”– David Pugh