Rams No Match For Blue Streaks 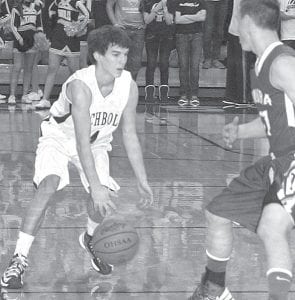 The Tinora Rams, under Andy Hunter, first-year head coach, rolled into Archbold, Saturday, Feb. 2, looking to cap off the weekend with a win over the Streaks.

The Rams had picked up a huge 57-47 win on Friday against perennial Green Meadows Conference powerhouse Wayne Trace.

The Blue and Gold, returning to the hardwood after an eight-day layoff, had other plans.

“I liked our effort tonight against a Tinora squad that came in here playing well and coming off a really good win last night against Wayne Trace,” said Doug Krauss, Archbold head coach.

“I know they were trying to build on that. I liked our effort and passion for the game tonight.”

The Streaks (13-3) struck first on a deuce by Evan Wyse, followed by a conventional three from Tyson Schnitkey.

The Rams finally got on the scoreboard with a threepointer from Kurt Kahle.

Schnitkey came right back for Archbold. Coming up with a steal, the junior went the length of the court for two and a 7-3 lead.

Schnitkey was one of two Blue Streaks in double digits, bucketing 11 points. Tyson Dietrich led all scorers with 21.

Jacob Miller was the lone Ram in double digits, with 10 points.

“Tyson (Dietrich) sometimes wants to dish off, but we have to keep working on him to keep going at the rim,” said Krauss. “He is such a big strong kid in there. He can be a force.”

“Archbold is a physical basketball team, and they kind of had their way as far as the inside game,” said Hunter.

“Tyson Dietrich is a phenomenal athlete. He just did what he wanted to do, and when you can do that you can put up points.”

As the quarter came to a close, Miller scored on a putback, closing the gap to 17- 12.

Luke Fisher opened the scoring for Archbold in the second quarter, but Tinora just would not go away. Kahle scored one at the foul line and EJ Kissel converted a turnover into two points.

Holding a 19-15 lead, Archbold rattled off the next seven points. Dietrich drove the baseline for two, then added a jumper for two more. Brandon Goering capped off the 7-0 run with a three.

Kahle hit a jumper and Alec Frank drained a three to cut the difference to 26- 20.

Dietrich closed out firsthalf scoring with a jumper and a 28-20 halftime advantage.

It was all Archbold in the second half. The Streaks outscored the Rams 16-11 in the third and held the Rams to just two field goals in the fourth for the 59-37 final.

“We had key contributions off our bench tonight, also from all the kids. This was a solid win for us,” said Krauss.

Tinora won the rebounding battle 31-28, but committed 18 turnovers to Archbold’s 11.