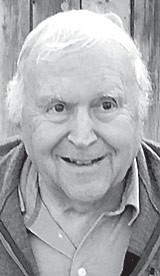 He attended a one-room school and then Archbold Schools. At Archbold High School, he played basketball and trombone in the marching band.

His good humor and jokes were much loved, according to high school yearbook comments. He returned often to Archbold for the Class of 1949 reunions.

Ralph went to Goshen (Ind.) College, but in summer went west to work for his sister Donna and brother-in-law Junior Wyse on their ranch in Westminster, Colo., and study at the University of Colorado. There he met Viva Stoltzfus.

Ralph and Viva served in La Plata, Puerto Rico, under the Mennonite Mission Board, 1953-1955, with Ralph working on rural agricultural projects and as administrator of the tobacco barn-turned-hospital there.

Ralph and Viva returned to Archbold in 1955. Sons Ralph Kent, Ron, and Jon were born in Archbold.

Ralph was a charter member of Zion Mennonite Church in Archbold and an active church youth leader there and at Little Eden Camp, Onekama, Mich.

In 1964, Ralph and Viva and their family moved to the Washington, D.C. area, living in Vienna and Fairfax, Va, and Bethesda, Md. He was selfemployed, managing commercial real estate. A business partner included Peter Greenburg.

They were astonished to discover that Pete’s family had lived in Archbold.

Pete’s father’s basketball skills and business success were well-known to Ralph from teachers at Archbold High School. Ralph connected the Greenburgs and the Sauders, and they established the Greenburg Gallery at Archbold’s Sauder Farm and Craft Village.

Ralph served on boards of the Friends Committee on National Legislation and Sandy Springs Friends School in Maryland. He was president of the Goshen College Alumni Board.

He and Viva established Goshen’s Ralph & Viva Lugbill Multicultural Award, providing scholarships to students from diverse backgrounds. He was a trustee of the first womens federally-chartered bank.

Ralph was active in the lives of his four children and an avid canoeist, skier, and hiker.

He and Viva travelled to Europe for their sons’ international canoe and kayak competitions. The entire family watched Jon compete in the 1992 Olympics in Barcelona, Spain, and encouraged son Ron’s coaching of Olympic paddlers.

He was active in the Trail Trekkers hiking group and “Over the Hill” skiing group until age 80. He scaled Longs Peak 11 times.

Ralph passed away July 4, 2017, following a year-long bout with cancer. He died peacefully without pain and with family.