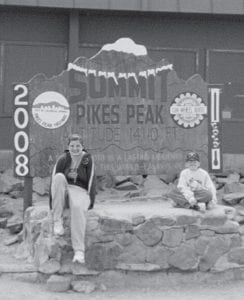 Rahel Frei, left, 2007-08 Archbold High School exchange student from Switzerland, at the summit of Pike’s Peak in Colorado. With her is her American family brother, Levi Strawn, 10, Burlington. The entire Strawn famly made the 13-mile climb up the mountain, contending with lower oxygen levels at higher altitudes.- courtesy photo

The Strawns, her American host family, found a challenge for her: climb the 14,110-foot Pike’s Peak.

Certainly it would represent a change from the area around the family home in Burlington.

“We were going to Colorado, so we said we would find something interesting to do,” Kristy said.

At five on the morning of Friday, June 27, Rahel and the Strawns- Kristy, husband, Jim, 20-year-old daughter Anna, and 10-year-old son Levi- found themselves at the head of the hiking trail that goes up Pike’s Peak.

The climb is 13 miles long and starts at 6,300 feet; above 10,000 feet, oxygen in the air begins to decrease, making breathing difficult.

Rahel had never climbed to such a high elevation before.

But Rahel was in shape for the trip. A runner back home, she had joined the Archbold cross country team. During the winter months she wanted to learn to play basketball, so she joined the AHS team.

In the spring, track coaches wanted her to run distances because of her cross country experience; instead, she chose sprints. Her relay team nearly made it to state competition.

Kristy said signs at the trailhead warn that the temperature can drop 40 degrees as the climber reaches higher and higher elevations.

They also caution about pos- sible sleet and snow.

She said the hike started with a discouraging sign that said, “this incline, three miles.”

Halfway up, Jim and Rahel passed a group of U.S. Air Force cadets from the USAF Academy at Colorado Springs. They were taking a break, and one was gasping for air.

Kristy said the group was lucky to have picked that particular day to climb. The next day, the peak was covered with clouds, “solidly socked in.”

On average, it takes eight hours to climb Pike’s Peak.

Rahel and her American father did it in six. The rest of the Strawns arrived over the next two hours.

“It was an incredible climb,” said Rahel, who has returned to her home country.

“From different parts of the mountain, there were wonderful sights to see. I didn’t have time or energy, though, to stop and take pictures.”- information provided by Kristy Strawn, written by David Pugh