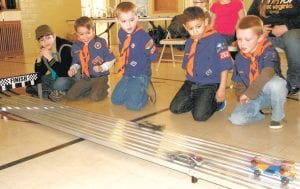 Archbold Cub Scouts watch as their Pinewood Derby cars fly down the track in one of several heat races. The cars start as blocks of wood. The cubs work them into racers, and customize them with their own ideas. They start down an incline to pick up speed before racing to the finish line. Above, from left: Ben Morris, a boy scout, monitors the finish line, while cubs Josh Morris, Trenton Tressler, Samuel Gonzalez, and Garrett Stamm watch the race. Right: Clayten Buehrer makes a careful last-minute adjustment to his racer on the starting line.– photos by David Pugh 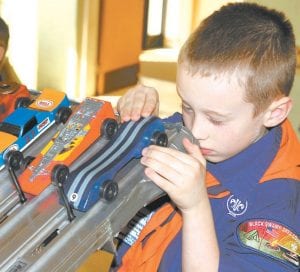