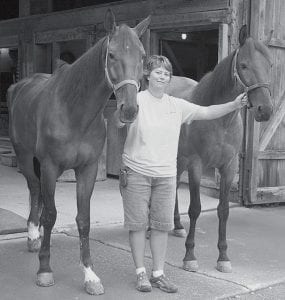 Jill Campbell, groundskeeper at Historic Sauder Village, holds Ike, left, and Thunder, who retired from the racetrack in July to settle into leisurely lives at the Village. Arlan Beck, historic farmer, said the horses have adjusted well to the new lifestyle of giving buggy rides and relaxing in the pastures.- photo by Alicia Buckenmeyer

Horses Ike and Thunder raced behind sulky carts just weeks before slowing down in July to offer carriage rides to guests at Sauder Village.

The Village needed to boost its four-horse equine team after one horse died and another retired, and the racehorses were a winning deal.

On the racetrack at eight years old, Ike “just got to the point where he was slow enough he wasn’t winning anymore,” said Arlan Beck, village historic farmer.

Thunder, a four-year-old gelding, wasn’t cut out for racing. “He just never really arrived at that point where they wanted him for speed,” Beck said.

However, both found a niche at the Village.

The horses, each worth a $1,500-$2,000 purchase price, were donated by New Vocations, a horse adoption agency that finds homes for retired racehorses.

During the adoption process, New Vocations visited the Village website, said Beck. “They really liked what they saw.”

The businesses made a deal: if the Village donated a weekend pass to New Vocation’s auction fundraiser, the typical adoption fee would be waived.

“It worked out great for both of us,” said Beck.

While it took Thunder a few days to adjust to carrying the heavier buggy at the Village, Ike was a natural.

“The first time we took him around, he acted like he’d always done it,” said Beck. Ike even ended the ride at the appropriate place in the barn.

“It was like he’d already been there,” Beck said.

The biggest adjustment for the racehorses was learning a new pace of life. In a press release from Sauder Village, Beck said, “Since they’re race horses, when they get in the harness they know they can go.”

Now, Beck said in a Monday interview, “they have to just stand and wait until people come.”

Since the horses came already trained, waiting and working at a walking pace were small adjustments that “went very, very smoothly,” said Beck.

“The nice thing is they raced at fairs. They’re used to a lot of people, a lot of animals, a lot of noise.”

From life in the fast lane, Ike and Thunder will have quite a transition to giving eight or ten buggy rides every fourth day. Yet, guests and horses seem pleased with the change.

“They got quite a personality,” said Beck of the horses. “They love the attention.”- Alicia Buckenmeyer