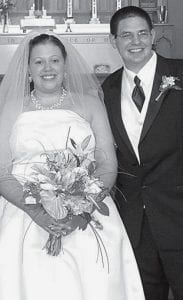 The bride wore a white, strapless A-line long gown, and a two-tier elbow-length veil with crystal edging. She carried a bouquet of stargazer lilies, alstromeria and freesia wrapped in cornflower blue ribbon with two crystal brooches.

Her maid of honor was Laura Nowak, Whitehouse. and Sara Leininger, Archbold, were bridesmaids.

They honeymooned in Amelia Island, Fla.

The bride is the daughter of Jim and Cathy Hayes, Archbold, and Jack and Mary Quimby, Stryker. She is a 2003 Archbold High School and a 2007 Bluffton University graduate, and is a homemaker.

The groom is the son of Vincent Waldron, Huntington, Ky., and Laura Waldron, Lima. He is a 2000 Elida Mennonite Day School graduate, and 2004 Bluffton Universty graduate, and is employed as a software engineer.

The couple resides in Columbus.