Quilt To Be Raffled At Friendship Days 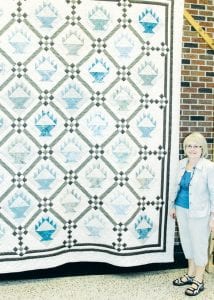 Glora Belle Yoder, an Archbold resident and PHS graduate, with the quilt she designed for this year’s Pettisville Friendship Days, June 22-24. More than 50 women worked on the quilt, which will be raffled.– photo by David Pugh

Handmade quilts are popular fund-raisers, particularly in Northwest Ohio, but auction prices for these artworks can easily climb into the thousands of dollars.

To give more people a chance to take home a handmade quilt, the feature quilt for Pettisville Friendship Days will be raffled, instead of sold at auction.

Glora Belle Yoder, who designed and pieced this year’s Friendship Days quilt, “Baskets in the Park,” said people who could not afford to purchase a quilt at auction have a chance to win the quilt.

Even if they don’t win the quilt, the money spent for raffle tickets goes to support the Pettisville Park.

Yoder’s nine-patch design is a combination of several patterns, she said.

“The basket isn’t an original design for me; it’s the way it’s put together,” she said.

The colors were selected because “when you’re making a quilt for a raffle, and you don’t know who’s going to get it, you’ve got to have something that’s appealing to a lot of different people that will go with a lot of different color schemes.

“It (the quilt) is pretty neutral, with just a little bit of color in it,” she said.

Yoder said she had been thinking about the design for two years.

She began working on it in the summer of 2011. Karen Nafziger marked the material for cutting; Yoder did the piecing.

The quilt top was ready to go into a quilt frame at Sauder Village in October 2011. More than 50 volunteer quilters from the community worked on it after hours, using a little over 500 yards of thread.

By early November it was ready for the binding, which was stitched by Anita Roth.

Money raised by the quilt, like all revenue generated by the every-other-year summer festival, goes to support the Pettisville Park.

Yoder said for more than 30 years, the park has been supported entirely by donations.

No tax money has gone to support the park.

This year’s Friendship Days event is Friday through Sunday, June 22-24, in the Pettisville Park.