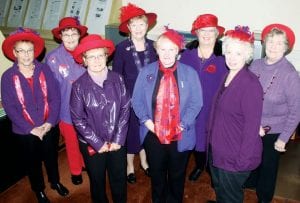 Members of the Tri-County Red Hats, an informal group of women, visited the Archbold Buckeye office Thursday, Nov. 1. They received a thank you note from Queen Elizabeth II, in response to a card congratulating the queen on her diamond jubilee. Members include, front row from left: Virginia Wiemken, Diane Sessen, Vicky Coombs. Back row: Judy Rand, Jackie Peterson, Sherry Schweinhagen, Karen Keesbery, Marlene Coressel. Schweinhagen, the unofficial leader of the group, is considered their “Queen Mother.”– photo by David Pugh

Proper etiquette requires that when someone takes the time to send a card conveying their best wishes on the occasion of a special event, a gracious thank you is in order.

That rule applies to everyone, including the Queen of England.

A group of area women have learned Queen Elizabeth II does not shirk her duties, as the Tri-County Red Hats received a most gracious thank you for the card they sent to the queen congratulating her on her 60-year reign.

Sherry Schweinhagen, the “Queen Mother” of the Tri- County Red Hats, an informal group founded in 2004, said she sent a handcrafted card to Queen Elizabeth on behalf of the group.

A previous card, sent in 2006 on behalf of the queen’s 80th birthday, brought a response from one of her ladies in-waiting.

Written on Buckingham Palace letterhead, it said, “The Queen wishes me to write and thank you all for the lovely card, which you have sent on the occasion of her eightieth birthday. 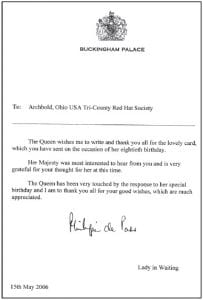 These are the letters the Tri-County Red Hats received from Queen Elizabeth II. Above: the 2006 letter they received after sending a congratulations card for the Queen’s 80th birthday. Right: a letter received after the Red Hats sent a card congratulating her on her diamond jubilee.

“Her Majesty was most interested to hear from you and is very grateful for your thought for her at this time.

“The Queen has been very touched by the response to her special birthday, and I am to thank you for your good wishes, which are ap- preciated.”

The note was signed Penelope de Pass, Lady in Waiting.

“The Queen does go through all of her mail at 11 o’clock in the morning,” Schweinhagen explained. “The lady in waiting carries her mail to her in a large basket.

“She would have dictated that letter to her secretary to write.”

Queen Elizabeth II assumed the throne after the death of her father, King George VI, in February 1952. This year marked her diamond jubilee.

The jubilee is a year-long affair with celebrations worldwide throughout the United Kingdom, Commonwealth, and beyond.

During the summer, Schweinhagen sent the card. 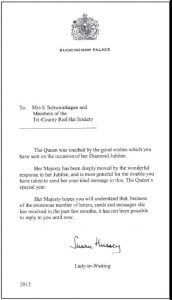 On Tuesday, Oct. 30, her grandson, Jack Fisher, 14, rural Archbold, was at her home and brought her mail.

“I was sorting through it and I thought, ‘what in the world is this?’ and then when I saw Buckingham Palace, I sort of screamed.

“Jack thought I lost my mind… ‘Grandma, are you all right?’”

“I wanted to just rip it open, but I couldn’t do that, so I had to find the letter opener to slit the envelope,” Schweinhagen said.

The letter, again on Buckingham Palace stationery, is addressed to “Mrs. S. Schweinhagen and the Members of the Tri-County Red Hat Society.”

It thanks the Red Hats for the trouble they took to send their message in the queen’s special year.

The 2012 response from the queen is signed by Susan Hussey, lady-in-waiting.

Schweinhagen kept the letter a secret from her Red Hat friends until their regular meeting, Thursday, Nov. 1.

The reaction from the other Red Hats was surprise.

“We just couldn’t believe it,” said Karen Keesbery, a member from the Ridgeville Corners area.

The Red Hats take their name and attitude toward life from a poem, “Warning,” by Jenny Joseph.

The poem is about becoming an old woman, when the author said she will wear a red hat with a purple dress and not care about the attitudes of others.

The only requirements for admission in to the group are being a woman over the age of 50 and a desire to “enjoy life to the fullest.”

The Tri-County group is so-named because members come from Fulton, Defiance, and Henry counties.

They meet monthly for lunch at an area restaurant, followed by a program or tour.

The group has never sent cards or letters to other famous women.

“Just the queen. She appreciates us,” Schweinhagen said.