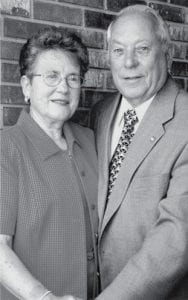 Jim and Doris Provost, Wauseon, and formerly of Fayette, were married on Sept. 29, 1947, in Angola, Ind.

The couple will celebrate their 60th wedding anniversary by hosting a weekend with their family at Sauder Village.