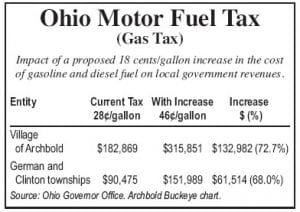 A proposed hike in the state tax on motor fuel could mean additional revenue for the village of Archbold and German Township.

It could also mean the price of a gallon of gas could go up 18 cents per gallon.

Daniel Tierney, spokesman for Mike DeWine, Ohio governor, said the increase in the motor fuel tax, commonly called the gasoline tax, will raise an additional $1.2 billion to be spent on Ohio roads.

Tierney said the issue of failing roads in the state were pointed out to him by elected officials from local governments during DeWine’s campaign for governor.

After DeWine took office, an advisory committee was appointed in January. On Feb. 15, the committee released its report, indicating that the state had a $1.5-billion deficit in transportation funding.

John Kasich, former Ohio governor, sold bonds, to be repaid by Ohio Turnpike tolls, to get $1.5 billion for roads. 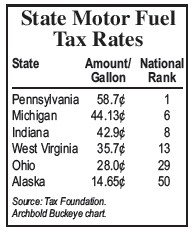 Today that money is gone, Tierney said, and the state must make an annual $390 million payment on those bonds– money that can’t go to new construction projects.

With an increase in the gas tax, Tierney said the money is split 60%-40%, with the smaller percentage going directly to local governments.

The advisory committee report recommended implementing the 18-cent increase in the tax.

Adding 18 cents to the tax would result in a total state tax of 46 cents per gallon, a 64% increase.

The remaining $300 million will come from Ohio Department of Transportation efforts to run its operation as efficiently as possible.

The proposal is in the hands of the state legislature.

If approved, Ohio motorists could begin paying the additional tax starting July 1, the start of the new state fiscal year.

Information from the Tax Foundation, a nonprofit agency studying tax policy, indicates Ohio has the lowest rate of adjoining states, with the exception of Kentucky at 26 cents per gallon.

Pennsylvania has the highest, and the highest in the nation, at 58.7 cents.

Alaska had the lowest rate– 14.65 cents per gallon.

Tierney said when the gas tax was last increased, it was anticipated that the consumption of gasoline and diesel fuel would increase, thus resulting in additional revenue.

For several reasons, he said that did not come to pass. Motor fuel consumption has more or less remained flat over the years.

Part of the reason gas tax revenues have not increased is that modern vehicles are much more fuel-efficient than in the past.

Since those vehicles use less fuel, they pay less tax.

Tierney said state legislators have looked at other factors as well.

He said some legislators noted horse-drawn buggies, operated by the Amish, use Ohio roads but pay no fuel tax.

Proposals were discussed for a user fee to be charged to hybrids and electrics, but Tierney said charging a user fee for hybrid and electric vehicles would generate about $3-$5 million a year– far from enough to fill a $1.5-billion budget hole.

The gas tax, he said, is the fairest way to assess road taxes.

Some other states levy road taxes on vehicle value; the owner of an older, cheaper car pays less than the owner of a new luxury vehicle, even if the older car travels more miles, creating more wear and tear on roads.

Theresa Gavarone, state senator representing Archbold (R-Bowling Green), said she will wait and see what the final version of the proposed gasoline tax hike is before deciding whether or not to support the increase.

“I would prefer to find alternate opportunities to fund road projects,” she said.

She is also for finding ways to tax hybrids and electrics– that the user fee (tax) for roads “be applied to every vehicle, not just on gas vehicles.”