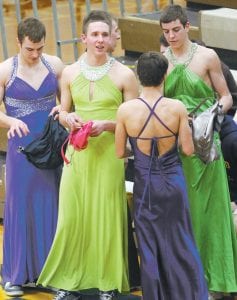 Several junior and senior players on the AHS boys basketball team put on prom dresses for the “Prom Dress Dash For Cash,” Thursday, Feb. 7, during the AHS-Delta girls basketball game. Four of the participants were, from left: Evan Wyse, Stuart Wyse, Jase Grosjean (back to camera), and Bryce Tinsman. Also dressed in prom dresses were Jay Miller, Emerson Radabaugh, and Tyson Schnitkey. As the boys dashed through the stands, fans could stuff money into the purses they carried. It was the second time the event was held this year. Approximately $1,000 was raised for the 2013 Archbold After-Prom.– photo by Mary Huber 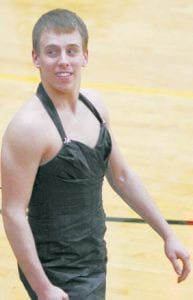 Jay Miller struts into the AHS gym, Thursday, Feb. 7, in a prom dress for the After-Prom Dash For Cash.