Predict 50 Entries For This Year’s Parade Of Lights 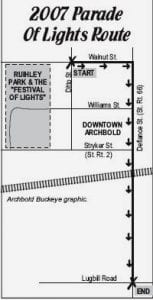 There are 45 entries in this year’s Parade of Lights as of Monday, Nov. 19, but Mari Yoder, Archbold Area Chamber of Commerce executive director, said she’s sure the number will hit 50.

“I always get five or 10 entries the last week. Always,” she said.

“We have our people who are in the parade year in and year out. This year, some of them might be taking a year off, but we have plenty of new ones to fill in.

“Sauder Woodworking is entering two units this year. We got a call from The Farmers & Merchants State Bank; they’re getting theirs around. Life Flight is coming.

“We’ve got some from out of town- Napoleon, Bryan, and Montpelier,” she said.

This year, the Archbold High School show choir, “The Company,” will carol in the downtown historic area starting at 5:30 pm. They will perform until the start of the parade at 6:30 pm.

At 6:30 pm, the parade steps out from the intersection of Walnut and Ditto streets, advances to North Defiance Street, and turns south. The parade will

Continued from first page) progress through downtown, across the Norfolk Southern railroad tracks, and continue south to Lugbill Road.

In the past, crowds have lined the streets from one end of the parade route to the other. Again this year, Christy Motors is making its showroom available to people with health issues who cannot view the parade from outdoors.

Ross has been in contact with Norfolk Southern about holding trains while the parade is in progress, “but there are no guarantees,” Yoder said.