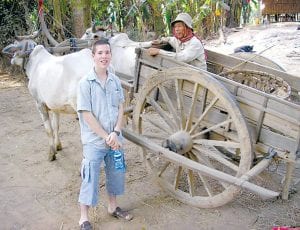 Andrew Pratt, PHS ‘06, spent a month in Cambodia teaching basic English skills as part of a research project for Defiance College. During graduation ceremonies in May, he received the Pilgrim Medal, DC’s highest honor. Top: Pratt in Cambodia, with a wagon drawn by water buffalo. Right: Pratt helps a Cambodian woman with her English studies.– courtesy photos

Andrew Pratt has been on an incredible journey, one that has taken him partway around the world, led him to study five languages in addition to his mother tongue, and serve people on two continents.

It’s a journey that’s far from over, but has already resulted in him receiving the Pilgrim Medal, Defiance College’s highest honor.

The Pilgrim Medal is described as the most prestigious award offered by Defi- ance College.

It recognizes traits of reliance in self, pride in work, courage in conscience, strength in education, and faith in God.

A bronze medal may be awarded to graduating seniors who give the most promise of exemplifying these traits of character.

Pratt, a 2006 Pettisville High School graduate and son of Jim and Carolyn, was visiting with his DC advisor, Donald Buerk, a history professor, last February.

“He said, ‘Andrew, I think you’re an eligible candidate for this award. Why don’t you apply?’” Pratt said. 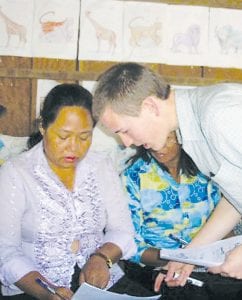 “I said okay, not thinking it was such a big deal. Oh well, no biggie, I’ll fill out an application and see where it goes, not expecting to get anything. I’m a student just like everyone else.”

He had to write an essay explaining his commitment to education, service, and faith in God.

“Those were the different aspects they wanted you to write on,” he said.

“I turned it in, and went on with life.”

“I was sitting there, and they announced the Pilgrim Medal. I sat there and looked over to one side– there’s lots of Andrews– and I’m like, ‘Wait, that’s you! Get up there!’”

“I asked, ‘is there anything else?’

“He said, ‘You want to say something?’ and I said, ‘Well, of course! You can’t just receive some nice honor and not thank everyone.’”

Part of the journey that led to being on the podium with the DC president started several years ago, after he received a scholarship to be an exchange student in Japan for three months during the summer of 2005.

Pratt said he had fallen in love with Asia before his Japanese experience, “but that was the culminating event, you could call it. That was my dream, to be an exchange student.”

In college, he applied and was accepted to become a scholar in DC’s McMaster program.

He performed educational research to teach basic English in Cambodia.

Pratt developed a program that presented an image, such as a cup, with the word “cup” in both Khmer and English.

He chose objects one would see in a hotel or elsewhere in the hospitality industry.

In December 2006 and January 2007, he and other scholars traveled to the Cambodian capital of Phnom Penh, where they spent a month.

Using the program he designed, he taught basic English to battered women at the Cambodia Women’s Crisis Center.

When he returned, he presented his results at a symposium.

Traveling to Cambodia wasn’t scary for the young man.

“I’d been to Philmont,” the Boy Scouts of America’s ranch high in the mountains of New Mexico, he said.

“You just have to be ready for anything. I’d felt pretty prepared.”

His preparedness came from a year of study, including finding someone who spoke Khmer in Napoleon.

He found the Cambodian people friendly and the experience “above and beyond” what he had anticipated.

For him, a highlight of the trip was finding a Church of Jesus Christ of Latter Day Saints– his church– in Cambodia.

“I saw the name of our church in Cambodian and this beautiful, nice chapel, and I said, ‘No way.’”

But Cambodia wasn’t Andrew’s only experience.

“I had studied Japanese, Chinese, Spanish. I thought, ‘Heavenly Father, another language?’”

He spent nine weeks in Utah at the church’s missionary training center, “learning how to pray, how to sing, how to conjugate verbs” in Dutch.

He became a missionary leader, with 50 young missionaries under him.

“It was a great experience,” he said.

Even today, he still writes in his journal in Dutch.

“I celebrated Christmas with my family, which was awesome,” he said.

“Two weeks later, I started school, in English, and I had a Shakespeare class– talk about language diversity!”

The next step in Pratt’s future is a master’s degree in TESOL, or Teaching English to Speakers of Foreign Languages, and bilingual education at the University of Findlay.

Someday, he hopes to be a college professor, teaching English abroad.

Wherever Pratt’s journey takes him, it will certainly be interesting.