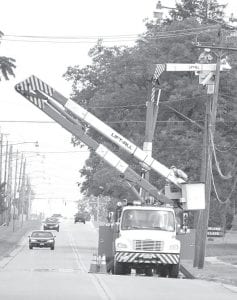 Several Toledo Edison workers were in Archbold, Wednesday afternoon, Aug. 4, restoring electrical service. Reggie Strauss, a Toledo Edison spokesman, said crews were responding to a pole fire near the intersection of St. Rts. 66 and US20A. While they were repairing the damage, an electrical arc occurred, damaging wires at the intersection of North Defiance Street and Lutz Road, then east along Lutz Road. Downtown Archbold and homes along North Defiance Street were out of power for almost 1 1/2 hours.–photo by David Pugh