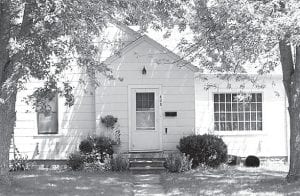 A suspected methamphetamine lab allegedly operated in the basement of this home at 408 South Lincoln Street while the caretaker was away.– photo by David Pugh

The remnants of a laboratory that could have been used to make the powerful drug methamphetamine were discovered in the basement of an Archbold home, Friday, July 5.

Police were called to 408 South Lincoln Street about 4:30 pm that day.

Jennifer L. Jones, 37, caretaker of the residence, told officers when she returned to the house at 3 am that day, she could smell the odor of burning chemicals.

The house was filled with smoke, she told police.

In the police report, the officer states he went into the basement, “where I observed the remnants of a methamphetamine lab.”

It was the second police report related to meth in less than a week.

About four days previously, on Monday, July 1, police were called to Lions Park on East Holland Street at about 3:59 pm after materials that could be used to make methamphetamine were found.

The Multi-Area Narcotics (MAN) Unit, an anti-drug task force made up of police officers from several agencies, was called to dispose of the materials in the park.

Martin Schmidt, Archbold police chief, said the unit has a specially-equipped trailer to allow it to handle some of the dangerous chemicals used to make meth.

That trailer was at the park on July 1.

It was not called to the Lincoln Street house.

He said officers are investigating the case with the assistance of the MAN Unit.