Pop Can Tractor Built By Boy For Grandfather’s Christmas 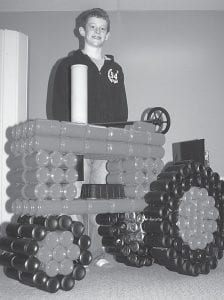 Isaac Petersen, 13, Archbold, with the model tractor he and his father, Mark, made with empty pop cans. The Allis Chalmers tractor is 47 inches long, 39 inches tall, and 20 inches wide. It’s a gift for Isaac’s grandfather, Bob Eis, Holgate. –photo by David Pugh

The photo that goes along with this article is of his 13-year-old grandson, Isaac Petersen, with a model Allis Chalmers tractor made mostly of 12- ounce pop cans.

Why is Eis so surprised? Issac’s creation is Eis’ Christmas present, and until he reads this article, he has no idea it’s coming his way.

“He would make machinery his family had, or he had when he was farming,” Mark said.

Isaac said they saw a similar, but smaller, popcan tractor at the Fulton County Fair, and decided he could build one, too.

Before starting the project, Isaac said he looked up a picture of a pop can tractor on the Internet.

“We kind of looked off that,” he said.

Of course, you don’t just find 322 empty pop cans lying around the house. Isaac said they went to the neighbors and got their empties.

The tractor was assembled by adhering the cans together with a hot glue gun. Individual sub-assemblies were painted Allis-Chalmers orange, then glued together.

Issac said he and his dad have been working on the project for months, after school started in August.

His six brothers and sisters have helped as well.

There is more to the tractor than just pop cans.

The exhaust stack is a cardboard tube from a certain brand of potato chip. A soup can and a carryout food container turned upside down and painted black make up the engine.

The steering wheel is of unknown origin.

“It’s something I found, I don’t even know what from,” said Isaac.

A plastic bucket became the seat, cut to shape.

Of all the parts of the project, Isaac said the back wheels gave them the most trouble.

“The back wheels were kind of wobbly, so we just did an axle to give them extra support,” he said.

The project isn’t quite finished. Isaac said he wants to use a piece of plywood to make the Allis Chalmers logo, which he will attach to the sides of the hood.

Working on the tractor with his dad has been fun, he said.

Isaac said his friends didn’t know about his tractor project.

What will they think when they find out?

“They will probably think I’m crazy.”

What will his grandpa do with the tractor?

“Whatever he wants,” he said.