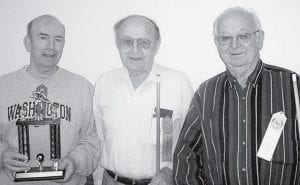 Hank Schwienhagen, left, was the winner of the March 3 pool tournament at Fairlawn Haven Retirement Community, Archbold. Wendell Newcomb, center, second, and Dale Gautsche, right, third. Newcomb had two runs of three balls in one game, while Gautsche had a run of five balls in the semifinals. – courtesy photo