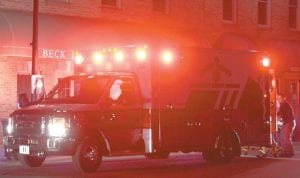 Ross said Stevens was conscious when he was found. Ross said he would not discuss any conversation Stevens may have had with the officer.

The officer called for Archbold Rescue, which responded to the scene.

Ross said Stevens suffered a gunshot wound to the left shoulder, which officers believe occurred in his apartment building.

Ross said a “long gun,” or rifle, was recovered. He said he did not know any of the specifics of the gun.

He also declined to say what led officers to believe the wound was self-inflicted.

Ross said the investigation is ongoing.

Ross said only Archbold police officers are involved in the investigation.

He has not called for assistance from other agencies such as the Ohio Bureau of Criminal Investigation.

During the initial response, a Fulton County sheriff deputy who happened to be in the area responded to the scene.

The deputy used her FCSD cruiser to block Depot Street.

Archbold fire crews used one of their brush fire trucks to clean blood from the pavement.

Ross issued a press release at about 11:25 pm, Monday, which stated: “On Monday, April 25, 2016, at about 9:18 pm, while on patrol, an officer of the Archbold Police Department found a 58- year-old male subject laying on the sidewalk at the corner of North Defiance Street and Depot Street with what appears to be a self-inflicted gunshot wound to the left shoulder.

“The subject was transported by Life Flight to Toledo.

“The investigation is ongoing.”

It is the first shooting in the village of Archbold since Feb. 23, 2015, when Conrad Wyse, Archbold, who was then 47, was shot in the left foot.

Vincent Rabe, 49, who had a rural Archbold address, entered a guilty plea on April 27, 2015, to a charge of felonious assault in connection with the shooting.

He is serving a five-year prison sentence at the Nobel Correctional Institution, Caldwell. Caldwell is located in southeastern Ohio.