Police Drone A Tool, Not A Toy 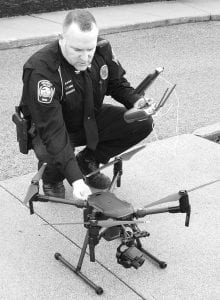 Leo Wixom III, Archbold police chief, prepares “Blue Streak One,” the APD drone, for a demonstration flight. The drone is a “quadcopter” design that uses four rotors for both lift and control. The controller, in Wixom’s left hand, has a tablet computer attached that allows the pilot to see what the drone cameras see.– photo by David Pugh

Drones– small radio-controlled aircraft– have long been seen as toys.

The Archbold Police Department does not agree with that assessment.

The first public discussion of the drone came about after it was taken to Stryker, Dec. 28, when a high speed police chase led to a crash and search for occupants of the vehicle.

While the drone was available, it was not deployed.

“Mainly, we’re going to use it for search and rescue,” said Leo Wixom III, police chief.

The drone has three cameras, including a thermalimaging camera. The infrared camera “can basically see in the dark, but it also works during the day,” he said.

The infrared camera displays the heat of an object relative to its background.

A person’s body heat will show as white compared to a darker, cooler background. It can even look at a car and determine if its engine is warm.

There is also a high-definition digital camera that can take both still pictures and video. The infrared and digital video cameras are mounted to the drone so they can swivel and tilt.

If a child wanders into a cornfield, the thermal camera will soon find them among the cooler corn plants.

The drone is operated by a handheld controller with a small tablet computer attached.

The view from the camera is displayed on the tablet screen.

The drone manages most of its own flying tasks, such as maintaining altitude, staying straight and level, freeing the officer to operate the cameras.

When told to do so, the drone lifts from ground level to four feet, where it hovers until given another command.

A third camera on the drone– a “point of view” camera– always looks out the front to help keep the operator oriented.

Additional anti-crash sensors keep the drone from running into things.

The drone is equipped with a GPS receiver so it can report its location and find its own way back to its starting point.

It can even do a grid search, without the officer flying it from grid to grid.

Batteries allow the drone to fly for 25 to 35 minutes per charge.

Considered an “industrial” drone, it weighs less than 54 pounds. It’s waterproof, so it can fly in a light rain or snow.

The drone can do more than search and rescue. It can assist in inspections, checking out rooftops or other areas from above.

If the village engineering department needs to look at a particular plot of land, intersection, or other feature, the drone can handle the job.

At the scene of a serious car crash, the drone can fly a 360-degree circle around the crash site, taking both video and still images.

“There’s a lot of different things we can use this (the drone) for, but mainly it will be for search and rescue,” Wixom said.

It can fly up to 400 feet high during daylight hours. It cannot be flown over people, and must be in the operator’s sight.

Wixom said he is working on a COA, or Certificate of Authorization, that will allow the drone to fly outside Part 107, such as at night.

One of the requirements is having drone “pilots” properly trained. Wixom said there is a man in Bryan who is certified to train drone operators.

“Once we get the training, we’ll have to take the test. We’ll probably go to Bowling Green for the test,” he said.

The plan is to have two officers certified to fly outside Part 107, plus others trained to fly the drone during the day.

What did the drone cost?

Donna Dettling, village administrator, said the total for the drone and all the support equipment (batteries, controllers, etc.) was about $18,000.

Wixom prefers to focus on the value, not the cost.

“The value of this is kind of one of those things. It’s priceless if it’s going to find a missing child or a missing adult.

“Was it expensive? Yes, it was expensive, but obviously, council saw the value and sees the value in this,” he said.

As part of the programming of the various pieces of software, the drone had to be given a name.