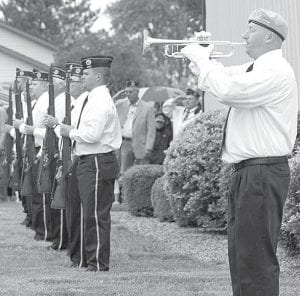 Matt Hines, a member of the Sons of the American Legion, Archbold Squadron 311, plays taps while members of the post rifle squad stand at attention during the Archbold Memorial Day ceremony, Monday, May 27, at the Archbold Knights of Columbus Hall.– photo by David Pugh