Playing In The Mud 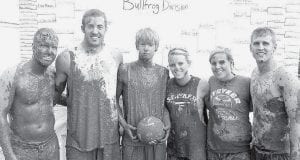 THE FAM, a team made up of members of West Clinton Mennonite and Pettisville Missionary churches, won the Bullfrog Division of the Oozeball mud volleyball tournament during the Black Swamp Benefit at the Fulton County Fairgrounds. The team also won the contest in 2006. Players included, from left: Tyler Woolace, Justin Rufenacht, Gabe Ruffer, Megan Boetz, Mandy Boetz, and Tom Short. About 200 players took to the mud on Saturday, June 21. The tournament raised about $2,500.- courtesy photo