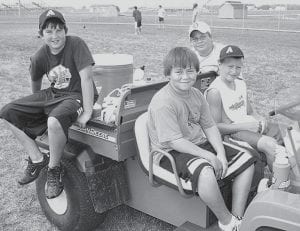 From left, Stetson Wilson, 11, Troy Flores, 11, Dylan Reisser, 13, and Lee Klinger, 12, relax around the school’s utility vehicle during football practice Friday, Aug. 3. Wilson, Flores, and Klinger are team managers, while Reisser was helping out. One of their jobs is to keep the team members’ water bottles filled and ready.- photo by David Pugh

The 11- and 12-year-old managers of the Archbold High School Blue Streak football program say they’re teased by some football players, but treated with respect by others.

The football manager corps for 2007 is made up of Stetson Wilson, and Troy Flores, 11, and Lee Klinger 12. Helping out, but not technically a manager is Dylan Reisser, 13. All are from Archbold.

Their jobs range from making sure the players’ water bottles are filled, equipment picked up during practices, and running errands for coaches. On game nights it’s their job to make sure the field is ready for the game, yard markers put out, chains to measure down distances are ready, etc.

Reisser describes their duties as “helping out.”

So how do the players treat them? Reisser said some ignore the managers.

“Some joke around with you,” Klinger said.

“Some joke around a lot,” Wilson said.

Among the 71 football team members, who stands out?

The managers also said Nicky Britenriker, a senior lineman, and Gene “Geno” Goering, a senior quarterback, treat them with respect.

Why do they take on the manager job, which can seem thankless at times?