Pitching Leads The Way For AHS Softball In 5-1 Week 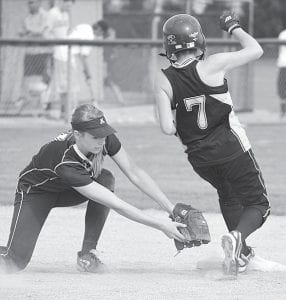 The tag of Blue Streak shortstop Becca Gerig is too late, and a Fairview Apache steals second base in the third inning of their non-league contest, Friday, April 13. AHS won the contest 1- 0.– photo by Mario Gomez

The Archbold softball team won three games by the score of 1-0 while winning five of six contests last week.

The Streaks defeated Liberty Center, Fairview, and Lima Bath by 1-0 counts; were victorious over Delta 13-3 and Findlay 11-3, and lost to Springfield 6-5. AHS 1, Liberty Center 0

Becca Gerig hit a solo home run in the third inning and Hanna Allison shut down the Tiger bats as the Streaks opened league play with a 1- 0 victory.

Allison gave up only one hit while striking out five.

The Streaks mustered only two hits as Chelsea Goebel also hit a double.

Archbold played errorless defense behind Allison to aid in the victory. Springfield 6, AHS 5

The Streaks fell behind 6-0 after two before battling back in the late innings, Tuesday, April 10.

Goebel and Allison drove in runs, and an error led to a third run in the fifth to close the gap to 6-5.

The Streaks loaded the bases in the seventh with two outs but were unable to get the tying run home.

The Streaks traveled to Delta, Thursday, April 12, for an NWOAL contest and came back with a convincing 13-3 victory.

The Streaks scored in every inning except one in the six-inning run-rule contest.

B. Gerig had a huge day at the plate, going 4-5 with two home runs, a double and six runs batted in. Mindy Rupp and Allison were each 3-4, with Rupp hitting a double and home run and Allison, two singles and a double.

Allison picked up the win on the mound, going five innings and giving up one run and five hits. Winter Fricke pitched the seventh and gave up two runs and two hits.

The Streaks hosted the Apaches, Friday, April 13, and won another tight contest 1-0.

Wyse reached second base on an error and later scored on a sacrifice fly off the bat of Allison.

The run proved to be the difference as neither team could mount much offense.

Archbold collected singles from B. Gerig and Goebel while Fairview managed only three hits.

Allison struck out 10 while walking only one. AHS 1, Lima Bath 0 8 innings

The Streaks and Wildkittens hooked up in a classic game, Saturday, April 14, that took eight innings to decide.

Kimmy Reynolds and Allison hooked up in an oldfashioned pitchers’ duel with the Streaks prevailing.

Megan Gerig started the eighth inning with an infield single. Cassidy Williams followed with a sacrifice bunt to move Gerig to second.

B. Gerig flew out to right field with M. Gerig advancing to third. Goebel then hit a clutch line drive single up the middle to score M. Gerig with the winning run.

B. Gerig and Goebel were each 2-4 at the plate.

Allison gave up six hits while striking out three and walking none. AHS 11, Findlay 3

Archbold capped off the week with the victory over the Trojans, Saturday, April 14.

The Streaks jumped out to a 5-0 lead after two and put the game away with three runs in both the fifth and sixth.

Wyse and Rupp each went 2-4 with two RBIs to lead the Streaks at the plate.

Hannah Kern gained her first varsity win, pitching six innings while giving up only two runs and seven hits. Fricke pitched the seventh and gave up one unearned run.

“This was a good week of softball for us,” said Joe Frank, AHS head coach.

“We battled every game this week and were able to make a lot of plays under pressure to pull off three 1-0 victories.

“Hanna Allison was absolutely dynamite all week on the mound, and we played solid defense for the most part. We still have room for improvement in all areas of the game, especially hitting.

“We are making strides and have a huge week ahead, including games with Evergreen and PH, who are both undefeated in the NWOAL.”