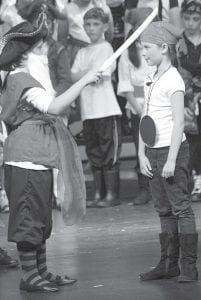 Riah Short, in the role of Whitebeard, left, the sage old pirate, declares the stowaway, Erin Reichert, officially a pirate of the Briny Sea, during the Archbold Elementary School third and fourth grade musical, “Pirates! The Musical.” The pirate band needs the stowaway, who has a beautiful singing voice, to win the singing contest, but the stowaway won’t sing unless he becomes a real pirate. Third and fourth graders performed the show Thursday, May 17 at the Archbold High School auditorium.– photo by David Pugh