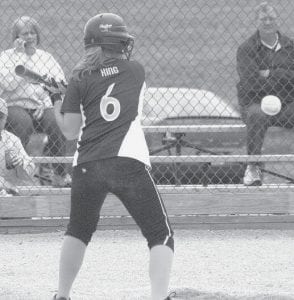 Kayla King eyes the ball and prepares to take a swing. The freshman led PHS with a triple and 2 RBIs in the Birds’ 5-0 victory over North Central, Monday, May 12.- photo by Scott Schultz

The Pettisville softball team ended its season just like the PHS baseball team, falling to Ayersville in the Division IV sectional final.

The second-seeded Pilots (13- 10) scored four runs in the third inning and two in the fifth for a 6-3 sectional title at Liberty Center, Saturday, May 17.

Pettisville had a 3-0 lead after two innings before the Pilots rallied.

Jordan Riegsecker was the losing pitcher. In seven innings she allowed six runs on seven hits, struck out four, and walked four.

Lauren Mengerink was the winning pitcher. She allowed three runs on five hits, struck out seven, and walked one in seven innings.

Pettisville ended its season with a 9-13 record.

The Birds stormed for six runs in the fourth inning in their 12-2 Div. IV sectional semifinal win over the Panthers, Thursday, May 15.

The score was tied at 1 after two innings, and PHS led 4-2 after three. The six-run explosion in the fourth gave them a 10-2 lead, and the Birds finished off the contest with two runs in the fifth.

Riegsecker was the winning pitcher.

Alexa Short was 4/4 at the plate, including two doubles and two runs batted in. Erica King was 3/3 with 1 RBI.

The Birds led 1-0 after one inning and 3-0 after two. Two more runs in the fourth gave PHS the 5-0 victory.

Riegsecker was the winning pitcher.