Pieces Of The Past Uncovered In Former Downtown Bank

Mike Childs, with part of the American Freedom Train mural that was on the wall when Ickey’s, a local restaurant, was located in the former bank building at 219 North Defiance Street. Childs purchased the building from Huntington Bank. James “Bummer” Dominique, owner of Ickey’s, said there was a pool hall and bar and grill in the building until 1978.– photo by Mary Huber

As crews working for Mike Childs, of Childs Investment Group, renovate the former Huntington Bank building in historic downtown Archbold, they uncovered a link to one of Archbold’s iconic businesses.

That, of course, is Ickey’s, the bar and grill with a sports theme that can trace its roots back to pre-World War II.

Prior to June 1978, Ickey’s was located on the south side of the first floor of the building at 219 North Defiance Street.

In 1978, the building was owned by the Tiffin Valley National Bank. Bank officials needed more room, so the restaurant was asked to leave.

The building itself was built in 1907-08 as The People’s State Bank.

Ickey’s got its name from its owner, Robert “Ickey” Dominique.

Dominique was a plasterer. Plastering was “ickey,” which gave him his nickname and the name for his business.

The walls of the bar-restaurant were decorated with people’s signatures and other graffiti. 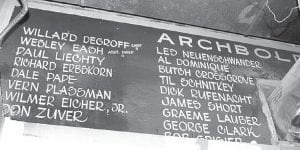 The roster of the Archbold Fire Department was painted on the wall of Ickey’s Restaurant when the business was located in the former bank building on N. Defiance St.– photo by David Pugh

Along the top of the north wall was a list of the members of the Archbold Fire Department.

On the top of the south wall was a graphic representation of the American Freedom Train, a special exhibition train that visited the village for three days in June 1975 as part of the national bicentennial celebration.

The train brought thousands of visitors to the village.

The fire department roster and Freedom Train murals were covered when a dropped ceiling was installed.

New wall covering only went up to the level of the ceiling.

Childs estimated he may spend about half of the purchase price on renovations. 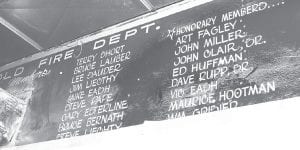 “We do have a budget. We may go over that a little bit, but I think we’ll be able to pull off what we need to pull off in that price range.”

The building did require some repair to the roof, “but all-in-all, it’s very solid. The bank (Huntington) did a nice job of keeping it up-todate. The renovations are all cosmetic,” Childs said.

Childs said plans are to move his financial services business into the downtown building and be operating Monday, July 16.

However, there is a contingency plan that would allow them to remain in their 1207 South Defiance Street building for an extra two weeks.

He said that building has been sold to Freedom Investment Services, Archbold.

James “Bummer” Dominique, Ickey’s son and current restaurant owner, said he didn’t know how far back the ground-floor room at the bank had been some form of bar.

In 1967, his father took over from Harold Nagel, who operated the business as a pool hall.

Prior to that, Cy “Vinegar” Allen had the business right after World War II.

Before that, Jerry Baker owned the business.

Ickey’s was a long, narrow room along the south side of the building, from the west end almost all the way to the east.

In the southeast corner of the building was a barber shop operated by Verle Dominique, Ickey’s first cousin.

After Verle gave up barbering, Ickey rented the barber shop space, but never did anything with it, Bummer said.

Most people entered through a back door on the west side of the building. They would have to go down a flight of stairs and then through a basement, walking along Ickey’s coolers, before going back up the stairs to emerge into Ickey’s.

“The old place was narrow,” Bummer said. “There was no air conditioning. There was a big draw fan at the back.

“When my dad took it over, it really was an old pool hall. Women didn’t go in there.”

“There was a morning crowd of guys who would come in for beer, and guys hung around on Saturday afternoon,” Bummer said.

“My dad took it over and changed it somewhat. After a certain amount of time, my mother (Audrey) came in to work in there.

“The food was never extravagant, but it was always good.”

Childs said he was drawn to the former bank building.

“I always liked the front facade. Such an eye-catching design– it defines classic, historic Archbold. I wanted to keep that front facade,” he said.

“When you see the brick work on the front, the ar- tistic nature of it, I didn’t want to see someone come in and doze that over or beat it down.”

When downtown buildings are left to deteriorate, “that sends a message or an image that’s just not favorable. I did not want to see that happen at all,” Childs said.

Childs said he and several other members of the community had conversations about the large yellow “For Sale” signs posted by a Toledo real estate firm.

“We felt that was just not something we wanted to see in Archbold,” he said.

However, the move to downtown is about more than saving local history. Childs said purchasing the building made good business sense.

Bummer said his father never had a lease with the bank.

After the bank asked him to move out in 1978, Bummer began planning for his own building across the alley.

After a skirmish with the village zoning board over parking, ground was broken in September 1978.

Since Tiffin Valley officials planned to fill in the basement, they told Bummer he could have whatever he wanted out of the old space.

He took whatever he could, right down to much of the old equipment, one back bar, the two front bars– even the old hard maple flooring for the new building.

“I took the cabinets out of the barber shop and used them as part of the back bar,” he said.

The range in the kitchen area “pre-dates my dad,” Bummer said.

They also saved the original tin ceiling tiles. People paid to have sayings or names painted on them.

Bummer said he and his brother Jake took the tiles down, cutting their hands on the sharp edges.

Bummer opened for business in the new building in March 1979.

“My intent here (in the current Ickey’s building) was to, as closely as possible, get a new site for the old bar.”

Today, Childs is putting a new business into an old space partly because of his commitment to Archbold.

“I grew up here,” he said. “This is my hometown. I want my kids to grow up here. I want my family business to stay here in Archbold.

“Archbold has been good to my family. I want to be good to Archbold.”