Pie In The Eyes…And Nose…And Ears 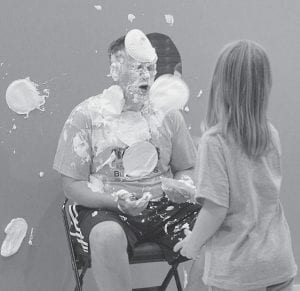 Top, Bekah Frey, a fifth grader at Pettisville Elementary School, throws a whipped cream pie at Jason Waldvogel, elementary principal, during a student assembly Friday afternoon, Oct. 19. Below, Waldvogel sweetly smiles at the cheering children. The chance to throw pies at the principal was a reward for 34 students who each raised more than $100 in donations toward Friday’s “Bird Walk,” a health walk the students participated in that morning. Waldvogel challenged them to raise more than $8,000, the previous record set in 2004. When he announced that 2007’s donations totalled $11,586.89, the gymnasium erupted in celebration. The money will be used to buy classroom manipulatives with an emphasis on science.- photos by Mary Huber 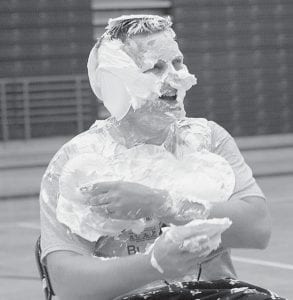