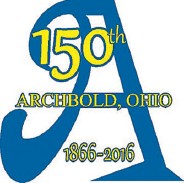 A picnic is planned as part of the Archbold Sesquicentennial celebration.

Nanette Buehrer, co-chair of the Sesquicentennial steering committee, said the Picnic In The Park will take place Saturday, July 16, in Ruihley Park, in the open area east of the Ruihley Park Pavilion.

The picnic will start at 11:30 am, after the conclusion of the Sesquicentennial parade.

It is scheduled to conclude around 2 pm.

Buehrer said families are invited to bring their own picnic lunches or get food from Archbold restaurants.

The American Legion Sons of the Legion squadron will also grill hamburgers, hot dogs and bratwurst that afternoon.

Cake and ice cream will be offered “until gone,” as well, she said.

Activities during the picnic include the Black Swamp Arts Council “Art Zone,” which offers children a chance to make their own art projects. 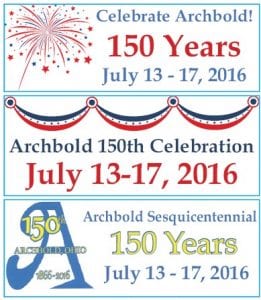 Sesquicentennial banners are being prepared that can be taped to windows of storefronts.– graphics courtesy Amy Cover

Large inflatable structures for children to jump and play in, will be set up.

There will be yard games for families, and the FISH Food Pantry will offer lemonade.

There also will be a strolling magician.

Speaking to council at its June 6 meeting, Wyse said new events added to the schedule include the Picnic In The Park and tours of the middle school, which used to be the high school.

As there are several class reunions scheduled during the celebration, school personnel will be on hand at various times to conduct tours of the old building.

The Archbold Community Library will celebrate its 100th anniversary during Sesquicentennial week. Cake and punch will be served Friday and Saturday.

Wyse told council the 150th Anniversary Parade will start at 10:30 am. So far, there are more than 30 entries.

David Zinn, a three-dimensional sidewalk chalk artist, will draw some of his artwork during the celebration. Wyse said the Sesquicentennial Committee is looking for two or three places where Zinn could create his 3-D pieces.

The fireworks display is set to begin at roughly 10 pm, Saturday night, July 16. The rain date is Sunday, July 17.

Prior to the fireworks, Wyse said the Archbold Evangelical Church will offer popcorn and smoothies, and invite the public to watch the show from its parking lot.

A booklet with information for a walking tour of the village is being prepared.

“Larry Baus and I have been working on getting it finalized,” Wyse said.

Plans are to have the booklets completed by the Fourth of July.

Wyse noted the celebration is just five weeks away.

During that meeting, Kris Jemmott, director of historical operations for Sauder Village, said she is “breathing a little easier” as the village historical display of Archbold artifacts is being prepared.

“We have more than we thought,” she said.

She said the historical display will open on Wednesday, July 13, the first night of the celebration and the night of the community worship service.

Jemmott said an intern has started working at the village, and is doing “a lot of good research.”

The display of Archbold artifacts will be set up in the Sauder Village museum building lobby.

There will be no charge to view the exhibit.

Steve Van Sickle, Archbold Community Theatre and a member of the Sesquicentennial Steering Committee, said ACT members are “pretty happy with the way things are going” as they rehearse the original play of Archbold history.

He said doing an original play is a different challenge than doing a show that had been performed before, or had been taken from a movie.

“If you’re doing something totally new, you get to create the concept,” he said.

She said about 15 churches have agreed to do tri-fold displays of their histories. Archbold Boy Scout Troop 63 is working on the project.

Erich Christman, pastor of St. John’s Christian Church, will be the speaker.

One highlight is that those in attendance will be asked to recite the Lord’s Prayer in their native language. Some of the languages expected to be heard besides English include Spanish and German.

Jake Sauber, a member of Troop 63, said booths will be set up at several events during the July 13-17 week to collect items for the Boy Scout time capsule project. The capsule is scheduled to be opened in 50 years.

Photo booths will be set up to photograph families. The photos will be included in the time capsule.

The capsule won’t be sealed until after the celebration, possibly in September. Jim Wyse suggested holding a small ceremony to seal the capsule. He suggested calling in government officials and inviting the media.

Pat Wyse, of the Archbold Lion’s Club, said committees are being formed for the chicken barbecue, Friday night, July 15, starting at 5 pm, and auction starting at 6:45 pm.

Also, a display of antique tractors will be arranged on West Holland Street near the park.

Wyse said the tractors will remain parked on the street overnight, then participate in the parade on Saturday.

Amy Krueger, director of the Archbold Area Chamber of Commerce, reported the McBoom! fund-raiser at the local McDonald’s raised $861 for the fireworks.

She said Betty Kohv, owner of The Scrapbook Korner, will prepare a scrapbook of local businesses to be included in the time capsule.

The movie that will be shown during the Archbold Parks & Recreation outdoor movie night, which will start between 9-9:30 pm, Thursday, July 14, has not officially been determined.

East Holland Street south of the municipal building will be closed for the movie.

A basketball tournament, sponsored by Junior Achievement, will be held in the middle school gym, starting at 9 am, Saturday.

Play will be suspended during the parade, Van Sickle said.

The department will host an open house on Sunday, July 17, with old photos and memorabilia on display.

Buehrer said Pape told her the department-owned 1955 ambulance is running, but the Howe fire engine from the 1930s is not.

It will be in the parade, even if it has to be loaded onto a flatbed truck, she said.

She noted the original fire department sign has been hung on the village vehicle storage building, at the corner of South Defiance Street and West Mechanic Street.

Live music will be presented Friday night at The Blue restaurant.

The Knights of Columbus will hold their Party in the Park Friday night from 8 pm to midnight.

Sesquicentennial banners are being prepared that can be taped to windows of storefronts. They will be about three feet by eight feet.