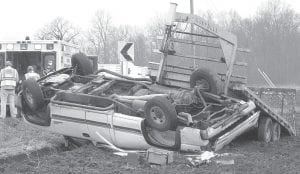 Fayette Rescue responded to the crash scene, but did not transport the two occupants of this truck which rolled over on St. Rt. 66 at the curves south of Zone early Friday afternoon, Dec. 7. The driver received a citation for failure to control his vehicle.– photo by David Pugh

The report states as Campbell attempted to negotiate the right-hand turn, the pickup and trailer went out of control on wet pavement. The truck went off the north side of the road and rolled onto its top. The trailer became unhitched, and came to rest partially on top of the truck.

Fayette Rescue was called to the scene, but did not transport either man.

An FCSD deputy issued Campbell a citation for failure to control.