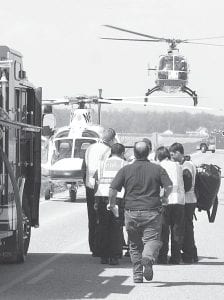 A crash between a commercial dump truck and a pickup Wednesday, April 21, at the intersection of US20A and Co. Rd. 22 sent two people to Mercy St. Vincent Medical Center. Top: Archbold Rescue workers prepare to load a victim aboard a helicopter ambulance; in the background, another helicopter ambulance lands for the second victim. Below: Richard and Judy Whaley, Fayette, were riding in this pickup when the crash occurred. Both have since been released from St. Vs.– photos by David Pugh

A pickup truck and a commercial dump truck collided near the intersection of US20A and Co. Rd. 22, about 2:48 pm, Wednesday, April 21.

Richard Whaley, 78, and his wife Judy, 69, Fayette, were taken from the crash scene by two helicopter ambulances to the Mercy St. Vincent Medical Center, Toledo. Both were released Saturday, April 24.

Richard Whaley was driving a pickup truck west on US20A, with Judy riding as passenger.

The Ohio State Highway Patrol on the accident states an eastbound semi was slowing to make a right turn, to go south on Co. Rd. 22. Nagel, who was behind the semi, could not stop in time.

To avoid hitting the semi, Nagel swerved left of center, where the dump truck collided

with the Whaley pickup.

The OSHP report states charges are pending against Nagel. 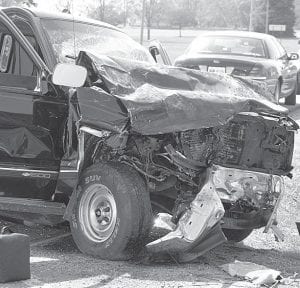