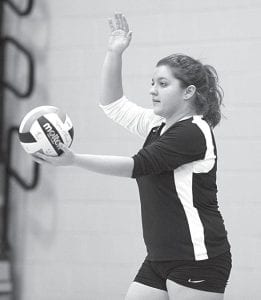 Emily Kauffman winds up to serve.– photo by Mary Huber

Pettisville defeated Stryker but lost to Edon and Swanton last week to finished the regular season in volleyball with an 11-11 record, 7-3 in the Buckeye Border Conference.

Kauffman had two aces, while Claire Fry had 12 assists.

Edon jumped out to a 13- 5 lead in the first game and never looked back as Edon senior Sydney Stoll took charge.

Once again in the second game Edon got a 13-5 lead and PHS couldn’t quite come back.

“For whatever reason, we were tense coming out tonight,” said John Horning, PHS head coach. “We struggled.”

The Birds came out a different team in the third game. After the score was tied at 8, an Ashlynn Waidelich kill gave PHS the lead for good.

The Blackbirds led 21-14 when Edon started to make a comeback on some unforced PHS errors. The Bombers closed within three, 23-20, when Horning called a timeout.

“I’m real proud how we came out in that third game,” said Horning.

“Coach Dorosz (Horning’s assistant coach) talked about being the better team and thinking that we had the potential to push them to the limit” in the huddle.

“I thought we started out the fourth game well, and then we just ran into a buzz saw a little bit, and got stuck on our serve receive,” said Horning. “We just dug too big of a hole.

“I think we just lost a little bit of our drive there in middle of that fourth game and we just couldn’t get it back.”

Hubby ended with 15 kills and 22 assists. Waidelich had 13 kills.

Once again serving errors plagued PHS, as the Birds had 12 serves go into the net or sail out of bounds.

Fry had 20 assists. Fricke had six kills, and Pursel had five.

Waidelich had 14 kills and four aces; Hubby had 12 kills, 24 assists, and two aces, Pursel had 10 kills and two aces, Fricke had nine kills, and Fry had 13 assists in Pettisville’s non-league loss at Swanton.

The winner plays topseeded Toledo Christian, Saturday, Oct. 20, 6 p.m., for a sectional title and a berth in the district tournament at Defiance, Tuesday, Oct. 23.