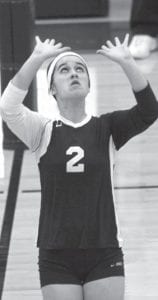 Claire Fry sets the ball to a teammate.– photo by Mary Huber

Volleyball fans certainly got their money’s worth at the Division IV sectional fi- nal between Pettisville and Toledo Christian, Saturday, Oct. 20, at Archbold High School.

The Blackbirds “came out and played well,” said John Horning, PHS head coach. “It was an environment they hadn’t played in to this point.

“Good crowd, a little bit of pressure, and playing against a really solid team.

“I thought we played those first two sets great; the way we finished them was even better. We just kind of got into a little rut that third game and never really got our confidence back per se, and to Toledo Christian’s credit, they played really, really well.

“We had their backs to the wall. Good teams come out fighting, and they did, and they deserved to win.”

“It was amazing, and as a coach you think, ‘boy, if we can do that we can do anything,’” said Horning.

The score was tied at 23 in the second game when Emily Hubby had a kill and Jordyn Pursel’s spike was mishandled by the Eagles, giving PHS the game 25-23.

TC began its comeback in the third game. After Pettisville tied the score at 9, the Eagles got the lead and never lost it, winning 25-18.

“The way this five-set match is now, that third set is so pivotal, and momentum is just huge,” said Horning. “We gave them momentum, and they used it like a good team should.”

Hubby led the Birds with 19 kills and 17 assists. Ashlynn Waidelich was also in double figures, with 13.

“I don’t know if I’ve ever had a better group of seniors as far as attitude, as far as being team-oriented, complimentary of others, encouraging of others, desiring to see their teammates do well, and not just saying they’re going to be that way but actually being that way.

“(They are) genuine kids that see the best in other people. We’ll miss them next year.

“I thought Devon improved immensely from last year to this year. Asking her to play a new position, (she) would do anything we asked her to do.

“The only question she’d ever ask is how can she get better, how can she improve. Always had a smile on her face. Became a lot more mentally tough as well.

“Molly worked really hard at getting better as well.”

Against Edon, Thursday, Oct. 11, “I think that’s the best she’s ever played as far as being a blocker and quick on her feet,” said Horning. “She was always encouraging other people.

“Carley is probably one of the most driven players I’ve ever had as far as always seeking out advice to improve her skills. I never had to wonder what she’s thinking; she would ask the questions. (She) worked extremely hard and was always encouraging other people.

“Emily Eicher always has a positive attitude in practice, win or lose. That next practice she’s yukking it up and having fun and making people laugh.

“She had really good defensive games this season. (She’s) another one eager to get better, eager to contribute in any way she can.”

Claire Fry took a “huge step up in leadership this year,” said Horning.

“Before the season started, we knew we were down a setter, and she volunteered to step into that role, which we wanted her to do but didn’t force on her, but she worked really hard at setting.

“At a team meeting she was the leader. Again, a very driven player, but she was never satisfied. She always wanted something more.

“Ashlynn worked really hard in the off-season. (She) went to some camps, and really wanted to have an impact and stay healthy this year.

“Unfortunately her knees held her back early, but she powered through.

“I thought she had a really good offensive year, both serving and hitting. Again, another one with just a good attitude. (She’s) someone that can laugh at herself but loves to make other people feel relaxed and a part of the team.”