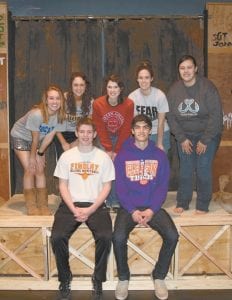 Although the South Pacific Theater in World War II might seem an odd place for not one, but two, love stories, and a place where the characters confront their own prejudices, that’s exactly the theme of the 1949 musical “South Pacific.”

Pettisville High School students will transform the school auditorium into various settings on the island during the production of South Pacific, March 10-11- 12-13.

“There are two couples, Emile and Nellie and Lait and Cable, and both couples are faced with their prejudice,” said Hannah Herring, a senior.

Gabe Beck, a junior, said Emile is a French plantation owner who has two Polynesian children by his first wife, who has died.

Herring explained Nellie “is like, ‘I can’t marry this person because, Emile has Polynesian children.’”

Lieutenant Joseph Cable, an officer in the U.S. Marines, falls for Liat, a Tonkinese girl played by junior Tessa Waidelich, but realizes he cannot marry her because of what his family may think.

“Cable sings, ‘You’ve Got to Be Carefully Taught.’ It’s pretty much about you’re not born with prejudice. Your parents and the people around you teach you,” Beck said.

“It’s a pretty deep message. It definitely deals with some stuff that can be applied to today.”

Elizabeth Miller, a senior who plays Nellie, said she believes the message of South Pacific “is so relevant today.

“We’ve been learning about civil rights in school, but I never really thought about being taught to hate until I heard the song.

“Now I think about it a lot, and I wonder how I can change that for my kids and future generations.

“How do I not teach them to hate at a young age?”

The show has some lighter moments as well.

For the role, “I get to wear a fat suit. I get to walk really funny. I get a weird laugh and an accent. It’s fun,” she said.

Beck’s character, Luther Billis, a sailor in the Seabees, the Navy Construction Battalion, is the comic relief.

“I get to wear a coconut bra and grass skirt,” he said.

“It’s for ‘the follies.’ It’s a talent show, to take off the stress and entertain the soldiers.”

Andrew Sauder, a senior who plays Emile, said there isn’t as much music in “South Pacific” as there was in last year’s show, “Joseph and the Amazing Technicolor Dreamcoat.”

That show was almost all singing.

But, Sauder said, “It’s harder to memorize the lines. You can’t sing them.”

The cast and stage are kept busy. Several actors have more than one role.

For example, Herring is not only a nurse and a nun, but she’s also the stage manager in charge of making sure set changes happen on time and on schedule.

With the set changes, the show “has it moments, but that comes with any production. Everything has to move somewhere else,” Herring said.

One actor said for the follies scene, “We have to put a stage on a stage. No big deal.”

“Speaking for the nurses, we have a lot of costume changes,” Mallory Riegsecker said.

With opening night fast approaching, will they be ready?

“We had a really good practice last night, “ said Abbigale Nagel, a junior.