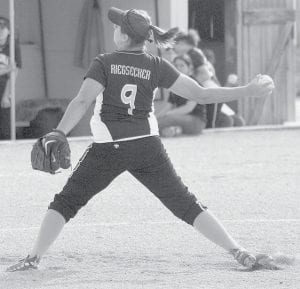 Jordan Riegsecker winds up on the mound for the Blackbirds. The PHS junior is 5-6 on the mound. Pettisville went 1-2 last week and is 6-9, 4-2 in the BBC.- photo by Scott Schultz

The Pettisville softball team traveled to West Unity, Monday, April 28 to take on Hilltop. The Cadets scored three runs in the fifth to lead it to a 5-3 Buckeye Border Conference victory.

The Birds were back on the road to Liberty Center, Tuesday, April 29, and came home with a 12-2 non-league loss.

PHS hosted Stryker in a BBC contest, Thursday, May 1. The Birds defeated the Panthers for the second time this season, this time by an 11-1 count.

The Birds scored one more run in the seventh for the 5-3 final.

Kayla King was 2/4 at the plate for PHS, with a triple.

Entering the bottom of the third the Tigers led 1-0 but five runs in the third, four in the fourth, and two in the fifth led LC to a win.

Pettisville scored individual runs in the fourth and fifth innings.

The Birds scored seven runs in the second and third innings for a 7-1 lead. Four more runs in the fifth and sixth innings gave PHS the 11-1 BBC victory.

Riegsecker (5-6) was the winning pitcher. She allowed Stryker only two hits, while the Birds had 11.

Katie Weber was 2/3 at the plate with a home run and two runs batted in. Lauren Bontrager was 2/2 with 2 RBIs and a stolen base.